Shinobi is a 2002 videogame released for the Playstation 2 only, developed by Overworks and published by Sega. While it is part of the Shinobi series, it has nothing to do with the plotlines of the other games, and their protagonist Joe Musashi turns up only outside the storyline as a bonus character. The plot instead concerns a ninja named Hotsuma who returns to find his clan, the Oboro, have been slaughtered and a wizard named Hiruko has summoned an earthquake and evil spirits to lay waste to Tokyo. Taking the demon-killing accursed sword Akujiki, he vows to end Hiruko's schemes. 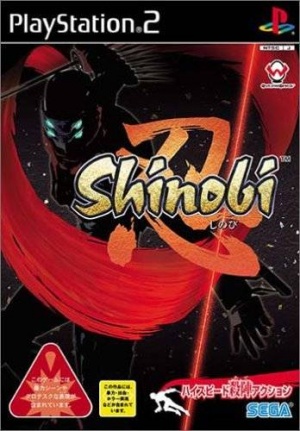 The following weapons can be seen in the video game Shinobi:

Firearms in Shinobi are exclusively confined to enemies, and rare even then; the game is primarily focused on melee combat against demons and resurrected Oboro footsoldiers using Hotsuma's cursed sword. The main appearance of a recognisable weapon is on a recurring boss enemy.

The game's only recurring boss, a helicopter used to deliver Hotsuma to the ruined city before being turned into a Hellspawn by one of Hiruko's talismans, mounts a pair of GE M134 miniguns in SUU-11/A gunpods under its wings, as well as two packs of four AGM-65 Maverick air-to-ground missiles. The final clamp on the minigun is shown with only four openings for barrels, and in some cutscenes the miniguns' barrel cluster is shown completely smooth. 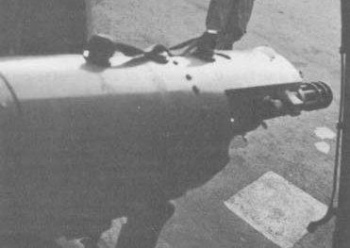 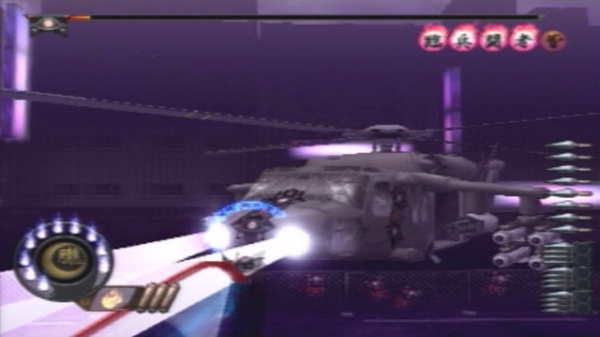 Hotsuma dashes towards the possessed Blackhawk helicopter, equipped with a pair of GE M134 miniguns in SUU-11/A gunpods.

It proves no match for the power of a ninja.

During the introduction, Hiruko is shown casting a series of Souhei Fu talismans into the streets of Tokyo to turn machinery into Hellspawn. One is shown striking a JGSDF Type 74 main battle tank, with a Browning M2 clearly visible on the commander's hatch.

A Japanese Type 74 main battle tank faces a rather unconventional assault from an evil wizard during the game's introduction, equipped with a Browning M2.

Though only implied, the Type 74, the vehicle mounted version of the Sumitomo NTK-62 GPMG, is presumably present as coaxial weapon on the possessed Type 90 main battle tanks encountered in the first half of the game, and the Type 74 main battle tank seen during the introduction. Neither type of vehicle is ever shown firing this weapon, though the Type 90s attack with their Rheinmetall L/44 120mm main guns at range. 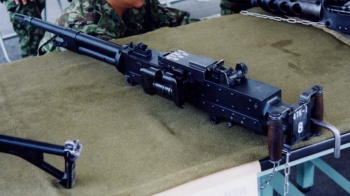 A Japanese Type 74 main battle tank, presumably armed with a coaxial Type 74 machine gun for the sake of confusion. 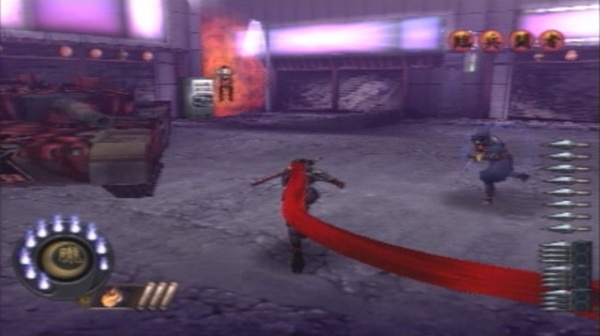