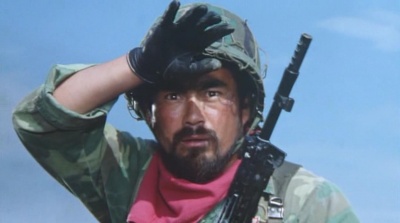 Shin'ichi "Sonny" Chiba is a Japanese martial artist/actor/director who gained a cult following for his role in The Street Fighter martial arts film series. In the ensuing years, he has appeared in such films as Aces: Iron Eagle III, G.I. Samurai, and Kill Bill: Vol. 1, where he portrayed legendary sword maker Hattori Hanzō.Sonny Chiba passed away on August 19,2021 due to complications from COVID-19 pneumonia. He was 82 years old at the time of his death.

For the films directed by Shin'ichi Chiba, please visit the talk page.