The following weapons were used in the film Rush Hour 3: 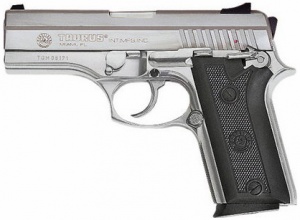 Carter (Chris Tucker) points Lee's stainless Taurus PT911 at the head of French Assassin (Kentaro). The markings on the slide are visible.

The other side of the PT911 slide.

The Beretta 92FS Centurion is carried by LAPD Detective James Carter (Chris Tucker) and used by him in Paris. What is perplexing is how he and Lee managed to bring their carry guns into France from the U.S.. Since they were detained by the French police, it is unlikely they would be allowed to keep their handguns, despite being police from other countries. 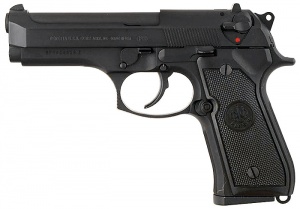 James Carter (Chris Tucker) blind-fires his Beretta 92FS Centurion from behind a wall in the hospital shootout.

A rubber stunt Beretta 92FS Centurion (as well as the live firing one) is seen during the motorcycle/taxi chase in Paris.

A fake Beretta 92FS Centurion lands on the sunroof of George's taxi.

A blued Kahr K9 is held by Kenji (Hiroyuki Sanada) when confronting Inspector Lee in the alley. Kenji uses the Kahr K9 throughout the film. 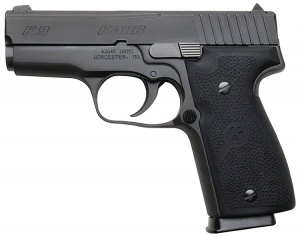 Kenji (Hiroyuki Sanada) holds his blued Kahr K9 during the standoff with Lee.

Kenji (Hiroyuki Sanada) stands down with his Kahr K9.

Kenji points his Kahr K9 at the head of Soo Yung (Zhang Jingchu).

One of the assassins in Paris points a Glock 17 at Carter and Lee.

The Glock 19 is used by a Triad assassin at the hospital. Detective Carter also uses this gun akimbo with the suppressed Walther P99 during the hospital shootout.

A Triad points a Glock at the head of Soo Yung (Zhang Jingchu).

LAPD Detective Carter (Chris Tucker) takes the Glock from the assassin and uses it in the hospital shootout.

A Walther P99 fitted with a suppressor is used by one of the French-speaking Triads in the hospital shootout. Carter takes this gun and fires it akimbo with a Glock 19.

French Assassin (Kentaro) attaches a suppressor to his Walther P99.

French Assassin (Kentaro) points his P99 at a "victim" on a hospital gurney.

A nickel-plated Colt Model 1908 Vest Pocket with pearl grips is used by Geneviève (Noémie Lenoir) to defend herself from an attack by Dragon Lady (Youki Kudoh). 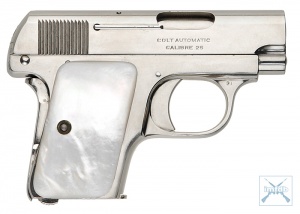 A wig-less and angry Geneviève (Noémie Lenoir) grabs two pistols from Triads who have attempted to kill her. The pistol in her left hand is a SIG-Sauer P226.

A very bald Geneviève (Noémie Lenoir) with two handguns. The one in her left hand is a SIG-Sauer P226.

A wig-less and angry Geneviève (Noémie Lenoir) grabs two pistols from Triads who have attempted to kill her. The pistol in her right hand is a Beretta 8045 Cougar F. 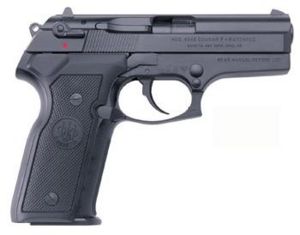 Varden Reynard (Max von Sydow) holds a two-tone SIG-Sauer P239 at the end of the film. 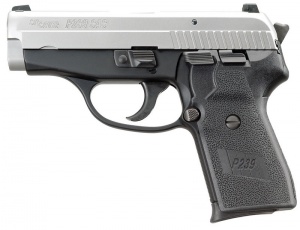 One of the assassins in the hospital shootout carries a satin chrome Heckler & Koch P7 pistol. 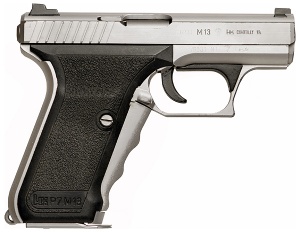 Two assassins fire their guns at Carter and Lee in the hospital shootout. The assassin on the left has a satin chrome H&K P7 pistol (unknown whether it is an M8 or M13). The assassin with the unidentified pistol on the right is veteran stuntman James Lew of Big Trouble in Little China fame.

When the pair first burst in, their positions are reversed, however the black finished gun is still hard to identify.

One of the assassins in Paris points a nickel-plated SIG-Sauer P226 at Carter and Lee.

Nickel-plated SIG-Sauer P226 pistol - 9x19mm. This is another real film gun and has been adapted to fire full flash motion picture blanks.

A Triad with a nickel SIG-Sauer P226 in the Paris Sewer.

In some scenes, Triads carry what appear to be SIG-Sauer P220s, the barrel apertures appear large enough to be .45 ACP. 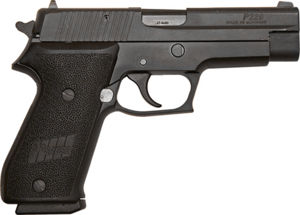 An unknown revolver (possibly a Smith & Wesson) is used by French Cabbie George (Yvan Attal) at the end of the film.

Full-auto firing Steyr SPPs are used by Triads in the nightclub attack scene. 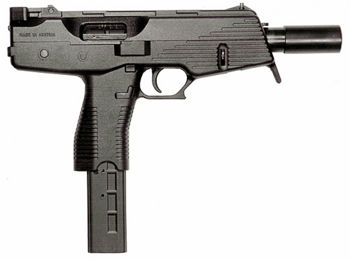 A quartet of gunmen open fire, two of them with Steyr SPPs firing full-auto.

The assassin in the background fires his Steyr SPP.

The Heckler & Koch MP7A1 is used by a Triad assassin during the attack on the cabaret show.

The tallest assassin with the goatee fires an H&K MP7A1 with 40-round magazine.

The tallest assassin with the goatee fires an H&K MP7A1.

A Mini Uzi is used by one of the Triad assassins on the Eiffel Tower.

Two assassins chase Carter and Lee on the Eiffel Tower, one holding an FN P90 and the other holding a Mini Uzi with stock folded.

A Triad assassin is first seen with an FN P90 during the attack on the cabaret show. It is seen again by the same assassin when chasing Lee and Carter on the Eiffel Tower.

A Triad assassin on the left holds an FN P90 during the attack on the cabaret show.

Two assassins chase Carter and Lee on the Eiffel Tower, one holding an FN P90 and the other holding a Mini Uzi.

In a prohibition Chicago themed act, a line of models/dancers in sexy mobster costumes fire a barrage of "fire" from very realistic-looking M1928 Thompson submachine guns.

M1928 Thompson aka "Tommy Gun" or "Chicago typewriter" with 50-round drum magazine - .45 ACP. Made famous through countless classic gangster films.

Dancers fire M1928 Thompson submachine guns. Here we see what is sometimes referred to as 'flashpaper' gunfire, i.e. non guns which fire a chemical flash that is not generated by firing actual blanks. It is safer and much quieter than blank fire.

The front muzzle of the Blaser R93 sniper rifle. Actually the entire rifle is never seen in one shot in the film.

Briefly seen in Charles de Gaulle International Airport are two French soldiers (wearing the correct French BDUs) carrying French FAMAS rifles. This is really only evident when the sequence is played back and forth several times, but it is technically correct for French soldiers at a major French international airport to carry their duty rifles.

Two French soldiers walk by with their FAMAS rifles.
Retrieved from "https://www.imfdb.org/index.php?title=Rush_Hour_3&oldid=1321266"
Categories: