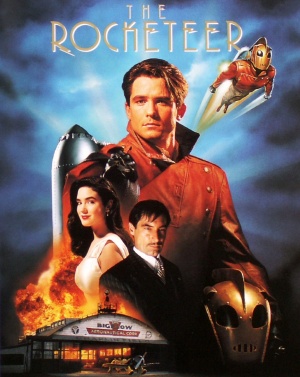 The Rocketeer is the 1991 feature film adaptation of the graphic novel series created by Dave Stevens. Set in 1938 Los Angeles, the film stars Billy Campbell as a young stunt pilot who comes into possession of a secret jet pack that is highly sought after by the US government, the mob, and Nazi spies. The film co-starred Timothy Dalton, Paul Sorvino, and Jennifer Connelly and was directed by Joe Johnston (Captain America: The First Avenger).

The following weapons were used in the film The Rocketeer:

The Colt Official Police is the standard issue firearm of FBI Agents and police officers in the film.

Fitch pulls his revolver during the shootout at Cliff's home.

The Colt Model 1903/1908 Hammerless is used by several of the thugs employed by Eddie Valentine (Paul Sorvino) near the beginning of the film. Eddie Valentine also pulls one during the confrontation at the Griffith Observatory.

Spanish Johnny holds his pistol as Lothar (Tiny Ron) prepares to break down the door.

Eddie Valentine (Paul Sorvino) also pulls one during the confrontation at the Griffith Observatory.

Sinclair's henchman, Lothar (Tiny Ron) pulls a pair of M1911A1s during a shootout at Cliff Secord's home. Other members of Valentine's gang are armed with M1911A1's as well.

Cliff (Billy Campbell) is threatened with an M1911A1.

One of the German commandos that arrive at the Griffith Observatory is armed with the Mauser C96. Cliff Secord (Billy Campbell) then takes the Mauser C96 from the commando and carries it as he chases the Zeppelin.

Cliff takes one last look at the battle before rushing for the zeppelin.

The Rocketeer strikes a classic pose.

Closeup of the Walther.

Sinclair threatens Jenny with the P38 while aboard the zeppelin.

The M1928 Thompson Submachine Gun is used by several characters in the film including Neville Sinclair (Timothy Dalton), Eddie Valentine (Paul Sorvino) and his gang.

Fitch and other FBI agents use their Thompsons to open up on Cliff's home.

Neville Sinclair (Timothy Dalton) firing the Thompson at the Rocketeer while in the nightclub.

One of Valentine's men places the Thompson on the ground.

What appear to be MP40s are used by German commandos and Neville Sinclair (Timothy Dalton) during the shootout at the Griffith Park Observatory. As the film is set in 1938, the use of the MP40 would be an anachronism, but artistic license could be claimed that they are meant to depict the earlier MP38, which would be less available as a prop.

A German commando fires the MP40.

Wehrmacht Soldiers in the newsreel are seen marching with Karabiner 98ks.

Several of the Police officers assisting the FBI are armed with Remington Model 8s.

Police officer at top left is armed with a Remington Model 8.

The officer on the left with the Remington Model 8.

Jenny (Jennifer Connelly) picks up a Flare Gun in the Zeppelin and tries to shoot Sinclair with it, she misses and only succeeds in setting the Zeppelin on fire.

The flare gun on the floor of the zeppelin.

Jenny picks up the flare gun.