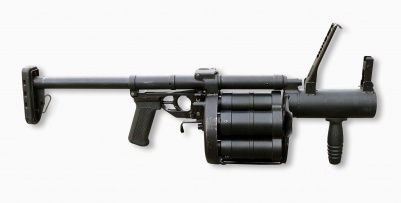 The RG-6 (also known by its GRAU index 6G30) is a Russian multi-shot grenade launcher. It fires 40mm caseless grenades from a six-shot cylinder. It was developed in 1993 by TsKIB SOO, a subsidiary of KBP Instrument Design Bureau.

The RG-6 grenade launcher and variants can be seen in the following films, television series, video games, and anime used by the following actors: