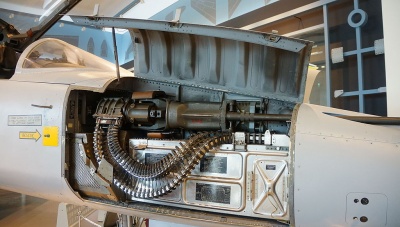 The Pontiac M39 is a 20mm revolver cannon developed for service in the US Air Force in the late-1940's. Like the British ADEN cannon and French DEFA cannon, it is based on the German MG213 revolver cannon which never entered service. The M39 was the standard gun armament for all USAF fighters until the M61 Vulcan came along, which fired the same round. Despite both being 20mm and introduced into US service around the same time, ammunition for the the Navy's Colt Mk 12 cannon is not interchangeable.

The Pontiac M39 and variants can be seen in the following films, television series, video games, and anime used by the following actors: