The following weapons were used in the film The Phobos (Fobos. Klub strakha):

Mosin Nagant Rifles can be seen in the gunstore.

PMN-2 were planted on the tunel. Three of it were activated, but only one explode. 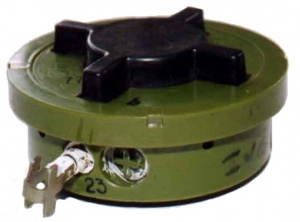 Close Up. A bit of second before explosion.
Retrieved from "https://www.imfdb.org/index.php?title=Phobos_(Fobos._Klub_strakha),_The&oldid=1053705"
Categories: