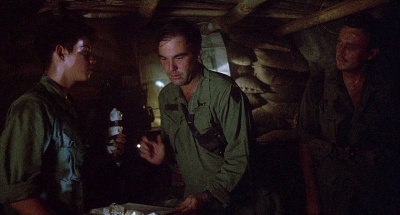 Director Oliver Stone in his cameo as The Battalion Commander in Platoon.

Oliver Stone is an Academy Award-winning America writer/director who came to be known for receiving an Academy Award for writing the screenplay for the film Midnight Express. Stone would later gained notoriety for helming such controversial films as JFK and Natural Born Killers. A Vietnam veteran, Stone also chronicled his experiences in the war in his 1986 film Platoon, for which he received Academy Awards for Best Director and Best Picture. He would go on to direct several films about the war, including Heaven & Earth and Born on the Fourth of July (for which he received his second Academy Award for Best Director).

Please visit here for the films in the IMFDB produced and/or directed by Oliver Stone.