Odd Thomas is a 2013 American film based on Dean Koontz's novel of the same name. It is directed, written, and co-produced by Stephen Sommers and stars Anton Yelchin as Odd Thomas, with Willem Dafoe as Wyatt Porter, and Addison Timlin as Stormy Llewellyn. It was hoped that Odd Thomas would start a movie franchise, but it flopped at the box office. Odd has physic abilities that can make him aware that something is going to happen or has happened. However he then has to investigate to find the answers.

The following weapons were used in the film Odd Thomas:

Stormy (Addison Timlin) loads her Beretta. She does not need Odd to keep her safe. She'll take care of it herself. 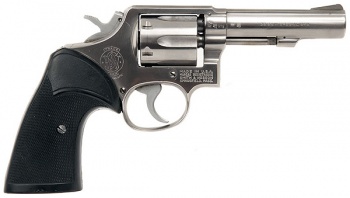 Goss with his Smith & Wesson Model 64.

Kevin Goss (Morse Bicknell) uses an M4A1 carbine during the attack on the shopping mall. The carbine has various components added to it.