The following weapons were used in the television series Obi-Wan Kenobi:

The Webley Mk 1 Air Pistol (modified as a blaster pistol with a small side scope, an enlarged muzzle, and fitted with a Remington Model 760 Gamemaster .222 4-round magazine.) is used by Obi-Wan Kenobi (Ewan McGregor) as his personal sidearm since he hasn't used his Lightsaber or Force skills for a long time after the fall of the Galactic Republic. 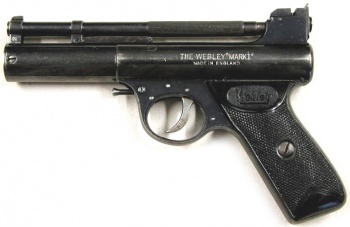 Obi-Wan shows his sidearm to Haja in "Part II".

A full shot of the blaster.

A decent shot of the modded Webley.

shot of the blaster in Obi-Wan's holster in "Part III"

Front view shot of the modded Webley showing the side scoop, in "Part III".

left side profile shot of the modded Webley.

Obi-Wan and Tala shoot their way off the Inquistiorous Base in "Part IV".

Obi-Wan hands his lightsaber and blaster pistol to Haja in "Part V".

A modified IMI Micro Uzi is used by Vect Nokru (Flea) as his primary sidearm. 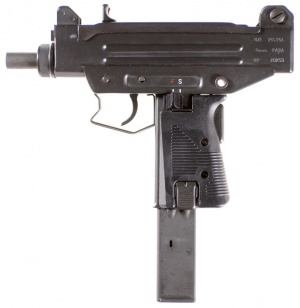 Vect holsters his sidearm after taking down an Alderran Royal Guard soldier in "Part I".

A blaster based on the Luger P08 is used by one of the bounty hunters working with Vect. 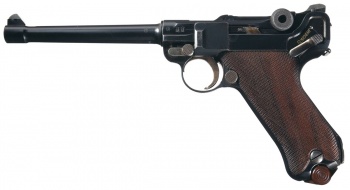 The pistol aimed at Obi-Wan in an ambush in "Part II".

The Rexim-Favor Mk5-based "BlasTech SE-14R" is used by Tala (Indira Varma) as her main weapon for the first half of "Part III" and in "Part IV". Imperial Officers stationed at Fortress Inquisitorous are also armed with the blaster. 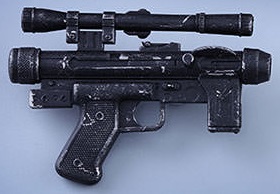 Tala (Indira Varma) uses her SE-14r to take down the Stormtroopers in "Part III".

Tala stands ready with her SE-14r.

An Officer opens fire on Obi-Wan alongside Stormtroopers in "Part IV".

Tala and Obi-Wan shoot their way out in "Part IV".

Tala (Indira Varma) switches to a modified Margolin as her main weapon when out of her Imperial Officer's uniform, carried in a cross-draw holster. 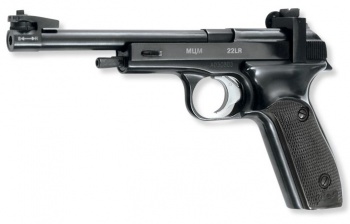 Tala puts on her holster belt with the modified Margolin inside it in "Part III".

Tala shows her tally count for all Jedi she's rescued on her blaster holster in "Part V".

The BlasTech DH-17 Blaster Pistol, based on the Sterling SMG, is used by one of the Path fighters in "Part V".

Pistol on the right.

The BlasTech DC-15S carbine is seen in "Part I" with Clone Troopers in a flashback after they receive the Order 66 directive.

A CT killed by a Jedi at Coruscant in "Part I".

The BlasTech E-11 Blaster Rifle, based on an airsoft Sterling SMG is seen with Imperial Stormtroopers. 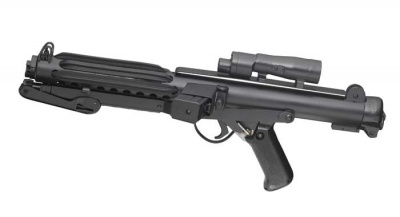 Stormtroopers with Inquisitors in "Part II".

The E-11 in Stormtroopers' side holster in "Part III".

Stormtroopers at check-point gate, all armed with the E-11 in "Part III".

Stromtroopers patrol the halls with their E-11s in "Part IV".

A lot of Stormtroopers assembled in "Part V" on Jabiim.

Purge Trooper opens fire on Obi-Wan through the gap in the door in "Part IV".

A Purge Trooper in "Part V" on Jabiim.

In "Part I", a Jawa merchant is seen with a cut-down Lee-Enfield No.1 Mark III* rifle in Tatooine.

A Jawa merchant in Tatooine with the CA-87 in "Part I".

A Flintlock Musket appears to be used by an armed man in "Part I".

The armed man with the musket in "Part I".

In "Part II", a hooded bounty Hunter uses a Merr-Sonn Munitions SX-21 blaster rifle which is made from a modified M60, made to look like a double-barreled pump-action scatter blaster rifle. The foregrip is changed to be a pump handle, and the main barrel and gas tube for the M60 is removed with 2 huge barrels in place.

The Loader droid is seen using an E5 Blaster Rifle against Stormtroopers in "Part V".

The loader Droid with an E5 Blaster Rifle.