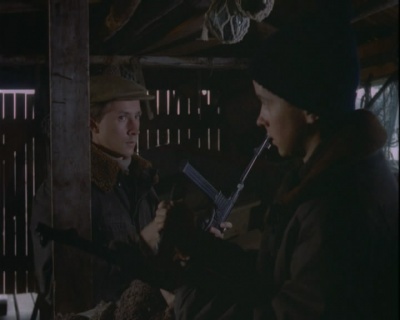 Nikolay Burlyaev (at the left) with an MP40 as Lyosha Vasiljev in Under a Stone Sky (1974).

Nikolay Petrovich Burlyaev (born August 3, 1946) is a Soviet and Russian actor and director. He started his cinema career in 1961, aged 15. Next year he appeared in one of his most notable roles, as Ivan in Andrei Tarkovsky's Ivan's Childhood. Later Burlyaev appeared in many movies, including another Tarkovsky's film - Andrei Rublev. In 1996 he was awarded the title of People's Artist of Russia.