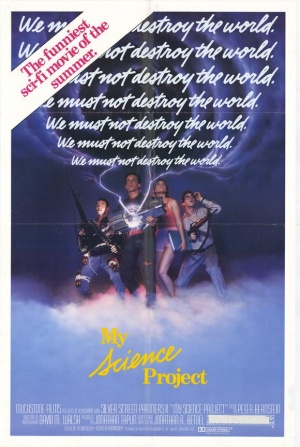 The following weapons were used in the film My Science Project:

The boys move through the mist-enshrouded gym armed with their M16s.

Vinnie (second from left) defiantly fires at the tyrannosaurus.

Although Vinnie and Sherman's M16s are of the ordinary variety, hero Mike manages to get one with an Cobray CM203 flare launcher (standing in for the M203 grenade launcher), which is what allows him to fell the monstrous tyrannosaurus the three go up against.

The launcher is visible here.

Mike chambers the launcher. In this shot you can see the square-shaped trigger guard, one of the features distinguishing it from the M203.

Mike fires a grenade into the dinosaur's belly.

The tyrannosaurus falls down with a giant, bloody hole through him.

Mike (John Stockwell) in awe of the firepower of a Vietnam-era weapon.

Vinnie takes a Remington Model 870 Shotgun with folded stock from a police car when the kids first enter the school. However, it turns out not to be loaded for some reason, forcing him to instead use it as a blunt object before they get the M16s.

Vinnie with the Remington Model 870 Shotgun.
Retrieved from "https://www.imfdb.org/index.php?title=My_Science_Project&oldid=1304658"
Categories: