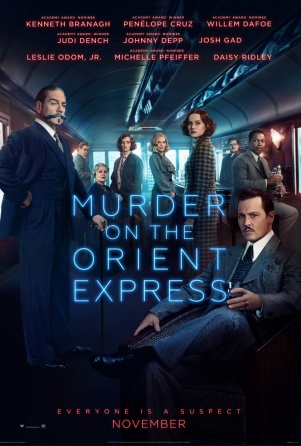 Murder on the Orient Express is the 2017 feature film adaptation of the 1934 Agatha Christie novel of the same name. Kenneth Branagh directs and stars in the film as the legendary Belgian detective Hercule Poirot, who in 1934 must solve a murder that has occurred on an express train that is caught in the middle of the snowstorm. Ridley Scott serves as a producer on the film and the cast includes Johnny Depp, Michelle Pfeiffer, Judi Dench, Leslie Odom, Jr., Daisy Ridley, Penélope Cruz, and Willem Dafoe. The 2017 film marks the fifth adaptation of the Christie novel, which follows a 1974 feature film that was directed by Sidney Lumet and starred Albert Finney as Poirot, a 2001 modern television film adaptation, a Japanese television miniseries, as well as an episode from the ITV series that starred David Suchet as Poirot. Branagh would return to direct and star as Poirot in the 2022 feature film adaptation of Death on the Nile.

The following weapons were used in the film Murder on the Orient Express (2017):

Mr. Ratchett (Johnny Depp) carries what appears to be a Colt Model 1903. He is shown keeping it under his pillow. The pistol also is seen in the hands of Dr. Arbuthnot (Leslie Odom, Jr.) and Buoc (Tom Bateman).

What appears to be a Colt Model 1903 is seen in the hands of Mr. Ratchett (Johnny Depp).

Ratchett's M1903 as he tries to "persuade" Poirot to act as his bodyguard.

Gerhard Hardman (Willem Dafoe) is seen with a revolver that Poirot (Kenneth Branagh) identifies it as a blued Colt Police Positive with a checkered grip, manufactured in 1927. He then confiscates it from Hardman. Later it is used, briefly, by Caroline Hubbard (Michelle Pfeiffer). 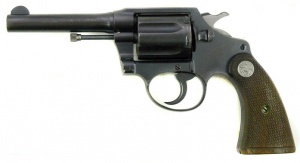 Gerhard Hardman (Willem Dafoe) is seen with a revolver that is identified as a blued Police Positive while investigating a noise.

Poirot gesturing with the revolver, having previously cocked the hammer.

Closeup of the revolver as Poirot places it on the table.

Police in Jerusalem use Lee-Enfield No. 1 Mk IIIs.

Police armed with Lee-Enfield No. 1 Mk III rifles keeping the crowd at bay.

Officers with their rifles.

An officer raises his rifle at a fleeing suspect.

Officer at the left holds the rifle.

A Yugoslav police officer is seen with what appears to be a Mauser rifle slung on his shoulder at the end, presumably an M24 Serbian Mauser given the location. The bolt and rear handguard are not shown.

A Yugoslav police officer is seen with what appears to be a Mauser rifle slung on his shoulder at the end, presumably an M24 Serbian Mauser.
Retrieved from "https://www.imfdb.org/index.php?title=Murder_on_the_Orient_Express_(2017)&oldid=1495184"
Categories: