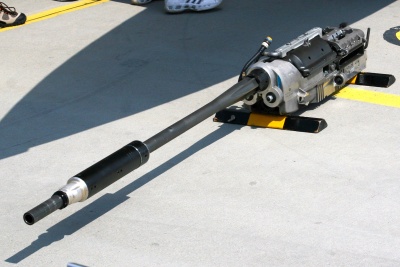 The Mauser BK-27 (BK is an acronym for Bordkanone, English: "on-board cannon") is a German revolver autocannon manufactured by Mauser while under ownership of Rheinmetall. Chambered in the proprietary 27x145mm explosive shell, the BK-27 was developed in the 1960s for the Multi Role Combat Aircraft (MRCA) program, which resulted in the creation of the Panavia Tornado fighter aircraft. Today, the cannon is mounted in the Panavia Tornado, Dassault/Dornier Alpha Jet, Saab JAS 39 Gripen, and the Eurofighter Typhoon. Remote-control naval gun versions, the MN 27 GS and the MLG 27 are also manufactured by Rheinmetall and used by ships of the modern German Navy.

The Mauser BK-27 appears in the following video games: