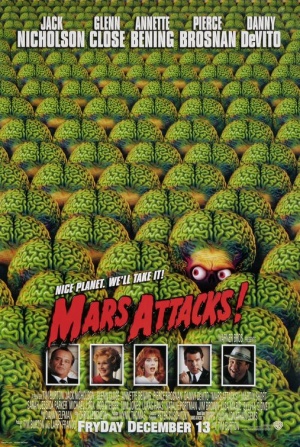 The following weapons were used in the film Mars Attacks!:

Because Mars Attacks! is meant to spoof alien invasion flicks from the 1950s and 60s, the United States Army in the film is seen in the film utilizing equipment and uniforms issued during that time period, in keeping with the production aesthetic. Consequently, all soldiers in the film carry the M14 battle rifle in 7.62x51mm NATO, which had long since been replaced by the M16 rifle family at the time of the film's release. During the first encounter with the Martians, Billy Glenn Norris (Jack Black) grabs a discarded M14 and tries to shoot the Martians with it, only to learn it is empty (which causes the magazine to fall out for some reason).

It is interesting to note that very few of the M14s in the film seem to fire blanks; it is often possible to see that the muzzle flashes of some rifles were added in post-production, that the actions do not cycle to eject blank casings, and that the actors playing the soldiers are faking the recoil. Also, the rifle that Billy Glenn Norris field-strips and then re-assembles in his trailer clearly has no selector, which means it is most likely a commercial semi-automatic M14 clone (such as a Springfield Armory M1A or a Norinco M14S).

Billy Glenn Norris (Jack Black) holds out an M14 rifle after assembling it while blindfolded. Note the lack of a selector, which suggests the rifle might be a Springfield Armory M1A or Norinco M14S.

U.S. soldiers - all wearing 1950's era olive drab fatigues and steel pot helmets - start firing at the Martians with their M14s after the aliens reveal themselves to be hostile.

Another view of soldiers firing at the Martians in the first encounter. Though the sound of automatic gunfire is heard in this scene, the soldiers' M14s are clearly not firing - there are no shell casings ejected, the actions don't cycle, and the actors are clearly faking the recoil of the weapons into their shoulders.

Billy Glenn Norris (Jack Black) attempts to shoot at the Martians with an M14, only to find out that it's not loaded. Note that he is grasping the magazine in his left hand; it's clearly not engaged in the rifle. When the M14 is empty, the magazine doesn't fall by itself as in the movie.

Honor Guards at Billy Glenn's funeral perform a rifle volley with their M14s. This is one of the few scenes in the entire movie where anyone seems to be firing real, blank-converted M14 rifles (as evidenced by the fact that the rifles very visibly eject shell casings and emit smoke from their muzzles when fired).

U.S. soldiers shooting at the Martians at the US Capitol. Note that the muzzle flash of the M14 fired by the soldier on the left is clearly fake.

General Decker (Rod Steiger) wields a pair of M1911A1 pistols akimbo whilst shouting at the Martian leader, which do no harm to the Martians as he's shrunk while firing them and then crushed underfoot. An interesting goof is that while he's firing at the Martians, one of his 1911s clearly goes empty, yet gunshots are still heard, and after a split-second cut to the Martians (with no time to reload), he is shown firing both guns again as though nothing happened. It is also interesting to note that during the White House attack, the Martian airhelmets can be cracked by a Beretta's 9mm bullets, but for some reason, General Decker's .45s are not strong enough to break the airhelmets.

General Decker (Rod Steiger) loads up one of his M1911A1s in the War Room.

Dual-wielding his M1911's, Decker takes a stand against the Martian Leader while spoofing Winston Churchill's famous "we shall fight them on the beaches" speech.

Decker firing his 1911s at the Martians. Note that the slide on the 1911 in his left hand is locked back, indicating it is empty, but he continues firing after this.

Unlike the US military, the Secret Service Agents in the film carry more modern weapons, namely Beretta 92FS pistols (even though in real life, the SIG-Sauer P228 would have been standard-issue to the USSS at the time of the film's release).

A Secret Service Agent fires his Beretta 92FS at the Martians when they attack the White House. Strangely, the Beretta's 9mm rounds are able to crack the Martians' airhelmet while later the General's .45's can't do the same.

Another Secret Service Agent with a Beretta fires at the Martians.

The President (Jack Nicholson) and the First Lady (Glenn Close) are escorted by their agents, all of whom brandish Berettas.

While in his trailer, Mr. Norris (Joe Don Baker) loads a revolver which isn't seen clearly, but appears to be a short-barreled Colt Official Police with a 4" barrel (judging by the shape of the hammer and the half-moon shaped front sight).

Mr. Norris (Joe Don Baker) with his revolver, which appears to be a Colt Official Police.

Browning M2HB heavy machine guns can be seen mounted on U.S. Army tanks and jeeps (note that the tanks in the film are also old-fashioned M-41s). When the Martians fry Congress, General Decker (Rod Steiger) gets on a tank and fires one at the Martian space ship. As with most of the film's M14s, the M2HB does not seem to be firing blank ammunition; it ejects no shell casings and the muzzle flash was clearly inserted in post-production.

At the Capitol, General Decker at the left stands on an M-41 tank while holding the barrel of the turret gunner's Browning M2HB.

Decker mans the M2 as the Martians retreat after destroying Congress.

A closer view of Decker firing the M2 at the aliens. Notice that the weapon does not eject spent shell casings, and the muzzle flash is a digital post-production effect.

Browning M1919's are mounted on jeeps traveling to the welcome event.

As General Casey (Paul Winfield) takes a call on the walkie-talkie, the Browning can be seen mounted on the jeep to his right.

A jeep on the right drives by with what looks like a Browning M1919 mounted on it.

A jeep races by with the Browning M1919 mounted on it.

The Browning is seen on the left.

Micro Uzi with 32-round magazine 9x19mm

Mitch, Micro Uzi still in hand, gets hit by a Martian ray-gun beam.

Sue Ann Norris (O-Lan Jones) and Mr. Norris (Joe Don Baker) load shotguns when preparing to fight the invading Martians, though they don't get a chance to use them as a Martian robot smashes their trailer with them inside. The one used by Mr. Norris has a 12 Gauge double barreled shotgun with two exposed hammers, so it's definitely an older-style design.

Charles Parker 1878 Side by Side Shotgun - 12 gauge. This is probably not the shotgun used by either of the characters in the film, but the closest we have here on IMFDB.

"I'll tell you one thing...they ain't gettin' the TV!"
Sue Ann (O-Lan Jones) puts the shell in her shotgun.

Mr. Norris throws Richie Norris (Lukas Haas) a shotgun and tells him to "lock and load", but Richie drops it to go and get his grandmother, Florence Norris (Sylvia Sidney). The shotgun appears to be a Winchester Model 1912, judging by the shape of the pump when Richie catches it.

Richie Norris (Lukas Haas) takes the shotgun from his dad - which appears to be a Winchester Model 1912.
Retrieved from "https://www.imfdb.org/index.php?title=Mars_Attacks!&oldid=1009248"
Categories: