The MIL Thunder 5 is an American revolver, the sole product of MIL (Munitions International Laboratory), Inc. It is a double-action revolver capable of firing .45 Long Colt cartridge and .410 bore shotgun shells, predating the introduction of the much more well-known shotgun shell firing Taurus Judge revolver by over a decade. It was produced from 1992 to 1998. While not considered a restricted short-barreled shotgun under US firearms law as it possess a rifled barrel, it is considered a short-barreled shotgun in California. In 1994, a California-compliant variant chambered in .45-70 Government only was released. Inserts were also manufactured that enabled the Thunder 5 to fire 9x19mm, .357 Magnum, .38 Special, or .38 Super. Unusually for a revolver, the Thunder 5 also has a manual safety.

Despite its novel design, the Thunder 5 generated little interest on the consumer market. It is noted for its large size and heavy weight- 3 pounds (1.4 kilograms) and an overall length of 9 inches (22.9 centimeters).

The MIL Thunder 5 and variants can be seen in the following films, television series, video games, and anime used by the following actors: 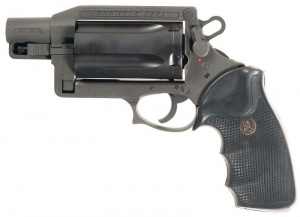 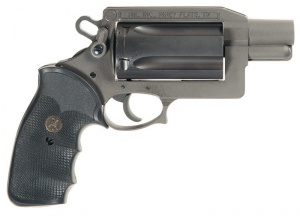