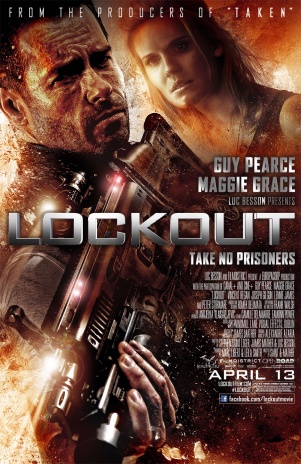 Lockout (2012) The rifle Snow (Guy Pearce) holds in this poster is an FN SCAR-L CQC with FN MK 13 grenade launcher and M16-style flash suppressor. This isn't used in the film.

Lockout is a 2012 science-fiction action film starring Guy Pearce as Snow, a former CIA operative who is framed for murder and who can regain his freedom if he manages to free the US President's daughter (Maggie Grace) from a space prison station orbiting the Earth.

The following weapons can be seen in the film Lockout:

Secret Service Agent Hock (Jacky Ido), the principal bodyguard of First Daughter Emilie Warnock (Maggie Grace), carries a Glock 26 as his backup gun. It is later stolen by Hydell (Joseph Gilgun) after Hock refuses to surrender it upon entering an interrogation room. 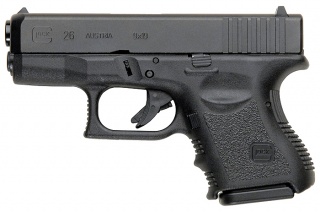 Hydell with the Glock.

Alex (Vincent Regan) holds the Beretta on the negotiator.

What appears to be a Beretta 90Two is carried in Snow's holster, best seen when Alex (Vincent Regan) removes the pistol from its holster. 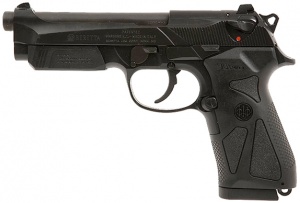 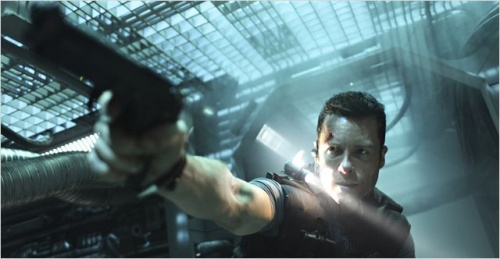 Snow holds the Beretta on a promo image.

Snow uses the Beretta in the opening fight.

Snow takes out an assailant with his Beretta.

Snow watches a surveillance video of him using the Beretta.

Snow with his Beretta drawn.

The Taurus 608 appears to be the revolver carried by the MS-One prison warden and later held by Hydell. 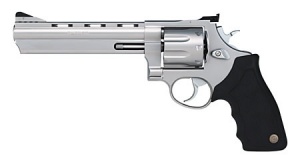 Snow (Guy Pearce) uses an MP5A5 with a futuristic mock-up in the trailer. It is fitted with a Mini Aimpoint sight. Emilie (Maggie Grace) briefly uses it to hold off advancing prisoners. 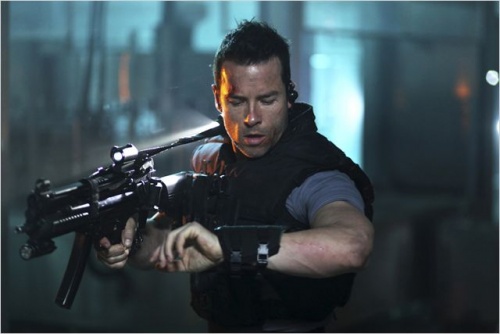 Snow (Guy Pearce) holds the MP5 in a promotional still.

The 3-round burst mode on the selector can be seen on this image.

Snow (Guy Pearce) and some other inmates are seen with Benelli M3 Super 90 shotguns with with standard and extended magazine tubes. Many are also fitted with weapons lights.

The Benelli M4 Super 90 is also used by various convicts, fitted with weaponlights.

Alex (Vincent Regan) with the Benelli as he searches for Snow and Emilie.

Snow (Guy Pearce) can be seen holding a Mossberg 500 fitted with a heat shield when he and Emilie end up in the infirmary. Emilie briefly carries the shotgun before Snow tosses it, noting that it is empty. Several prisoners carry Mossberg 500s as well.

"Here's an apple, and a gun. Don't talk to strangers, shoot them." Snow (Guy Pearce) hands a Mossberg 500 to Emilie (Maggie Grace).

A Winchester 1300 shotgun is another shotgun used on the station.

Alex (Vincent Regan) holds the Winchester shotgun as he removes the pistol from Snow's holster.

Several convicts can be seen armed with shotguns that appear to be Maruzen CA870 CQB, distinguishable by their small detachable magazines.

The convict in the background carries what appears to be a Maruzen CA870 CQB, distinguishable by the detachable magazine at the bottom.

In a continuity error, the SWAT officers entering an appartment suddenly switch from Colt Model 933's to F2000 Tactical rifles.

A SWAT officer armed with the FN F2000 is taken down by Snow.

Other SWAT officers carry M933 rifles with various accessories during the opening chase.

The police hovercraft opens fire with its gatling gun.
Retrieved from "https://www.imfdb.org/index.php?title=Lockout&oldid=1369424"
Categories: