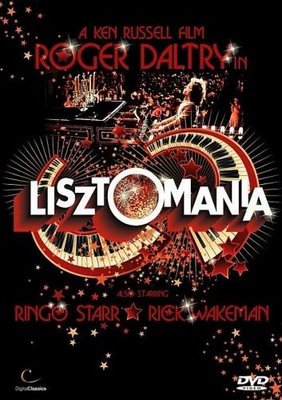 Cover of the Digital Classics DVD

Lisztomania is a surrealist 1975 musical directed by Ken Russell (Billion Dollar Brain) that chronicles a fantasy of Hungarian composer Franz Liszt (Roger Daltrey) spending years like a rock star before deciding to compose religious music for the Catholic church. He is ultimately commanded by the Pope (Ringo Starr) to exorcise evil German composer Richard Wagner (Paul Nicholas), who plans to make Germany conquer the world by means of his music.

The following weapons were used in the film Lisztomania:

Richard Wagner (Paul Nicholas) enters into Liszt's mansion and shoots the guard with what appears to be a Colt 1860 Army revolver. He later points it towards Liszt as he enters his room.

The usage of this revolver would be an anachronism, as the depicted scenes take place during the Hungarian Uprising of the year 1848. However, this is a Ken Russell movie, so we shouldn't bother.

Wagner aiming towards the guard

Wagner rushing into the room, pointing the revolver towards Liszt

As he enters the room

Just as Liszt intends to leave for the Pope's mission, Olga Janina (Nell Campbell) threatens to shoot him with a short-barreled Flintlock Pistol. As Liszt is in fact leaving, Janina fires the pistol, but obviously misses.

Richard Wagner presents a mixture between an electric guitar and a machine gun to his fellow "Wagner youth" children. Later, after Wagner has been killed by Liszt, a zombified mixture of Wagner and Adolf Hitler arises from the grave, holding the Guitar Machine Gun in his hands. The weapon is used to shoot fleeing Jews in the following scene, as well as Cosima's former husband Otto von Bülow (Andrew Reilly), who dares to step into Wagner-Hitler's way.

Superhero-dressed Wagner presents the Guitar MG for the first time

The resurrected Wagner arises with the MG

The muzzle flash is seen during the massacre in the street

More details on the muzzle

Franz Liszt (Roger Daltrey) uses a flamethrower-equipped stage piano during the climax of the movie and ultimately kills Richard Wagner, who then is resurrected in the mentioned way.