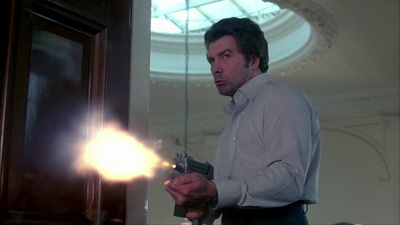 Lewis Collins with a M16A1 with M203 grenade launcher as Enrique Carrasco in Commando Leopard (1985).

Lewis Collins (May 27, 1946 - November 28, 2013) was an English actor. From 1974 he appeared in about 30 movies and TV series. His most notable roles are Bodie in The Professionals and Capt. Skellen in The Final Option. In 1982 Collins auditioned for the role of James Bond but his audition was deemed "too aggressive".Lewis Collins joined 10 Para (a British Territorial Army unit) in 1978. At the age of thirty-two he passed the actual selection course for 23 SAS, one of the SAS' two Territorial Army battalions, only to be turned away from the unit because of his celebrity status. He was deemed to be a security risk. The SAS stresses anonymity and a well known actor would be too visible.