Let Me In is a 2010 horror film written and directed by Matt Reeves. The film is an American remake of the Swedish horror film Låt den rätte komma in ("Let The Right One In") that was directed by Tomas Alfredson (Tinker Tailor Soldier Spy). Kodi Smit-McPhee stars as Owen, a bullied schoolboy who befriends a reclusive girl who appears to be the same age as him, but is, in fact, a vampire several centuries old.

The following weapons were used in the film Let Me In:

The "Policeman" (Elias Koteas) uses an M1911A1 throughout the movie, notably when he investigates Owen's apartment. It was never cocked during the time he had it out. It is also used by Abby's "Father" (Richard Jenkins). 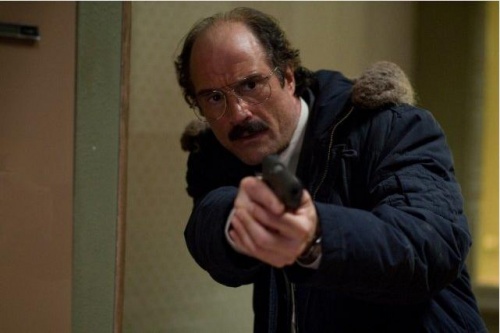 A Production still of the 'Policeman' (Elias Koteas) with an M1911A1.

The "Policeman" prepares to breach Owen's apartment while holding his M1911A1. Note that the hammer is down during this scene, which is quite dangerous as he is about to enter a possibly dangerous situation where he might need his pistol.

The "Policeman" with his M1911A1 after breaking down the door to Owen's apartment.

The "Policeman" aims his M1911A1 as he discovers Abby (Chloë Moretz) sleeping in a bathtub.
Retrieved from "https://www.imfdb.org/index.php?title=Let_Me_In&oldid=1142035"
Categories: