Late Phases is a 2014 horror film directed by Adrián García Bogliano. In the film a blinded Vietnam war veteran Ambrose McKinley (Nick Damici) moves into a retirement community, where he is attacked by animals. Losing his dog during the attack, he starts to suspect the assailants might be something more than just animals.

The following weapons were used in the film Late Phases:

Ambrose McKinley (Nick Damici) has a Smith & Wesson Model 64 that he uses for protection in the film. 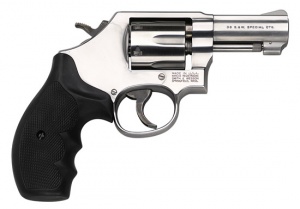 Ambrose holds his Model 64 as he listens to his surroundings.

Close-up of the revolver as Ambrose fires his Smith at a werewolf.

Ambrose listens to any threats in his surroundings and fires his Smith & Wesson Model 64.

Ambrose McKinley also uses a Remington Model 700 without a scope in the film. His son, Will McKinley (Ethan Embry) is also seen using it.

Ambrose takes aim with his Remington rifle, using his hearing aid as a kind of sonar, instead of his vision.

Will holds his father's rifle.

Will takes aim with the Remington 700 BDL.

Ambrose holds his shotgun after firing it, covered in blood.

Police officers are seen with holstered Beretta 92FS pistols in the film, altough it is likely these are just replicas since they are never actually used in the film. A gun store clerk is also breifly seen handling a Beretta when Ambrose visits the store.

Police officers with their holstered Berettas.

The gun store clerk puts his Beretta down.

Various crossbowss and small arms are seen inside the gun store.

A couple of crossbows can be seen in the gun store.