Kochubey is a Soviet 1958 B&W historical war movie directed by Yuriy Ozerov and based on the novel by Arkadiy Perventsev. It depicts the life and death of Ivan Antonovich Kochubey (Nikolay Rybnikov), a notable Red Army commander of Russian Civil war, known for his courage and talent of military leader, but also for incredible indiscipline. This lead him to conflict with high command of Red Army (in the movie this conflict is shown as a result of a conspiracy of White agents). As a result, Kochubey's brigade was disbanded. With several trusted men, Kochubey falls under attack of Whites. Exhausted by the disease, he is captured and executed.

The following weapons were used in the film Kochubey:

Ivan Kochubey (Nikolay Rybnikov) disarms the commandant of the building of the Central Executive Committee of North Caucasian Soviet Republic who tried to prevent Kochubey from entering.

Mit'ka Shilo (Konstantin Sorokin), a commander of a unit of Kochubey's cavalry brigade, fires at a railway tank car with "Poison" indication and finds out that it contain brandy alcohol.

Andrey Roy fires a Nagant in the last stand against Whites. The angular post-1930 front sight can be seen.

Akhmed fires his revolver in same scene. His Nagant seems to have pre-1930 rounded front sight.

Kochubey fires his Mauser during the cavalry attack.

Sashko Nalivayko (Yulian Panich), a commander of a unit of Kochubey's cavalry brigade, holds a Mauser (at the right).

Sorokin carries a Mauser in holster.

A good view of Kochubey's Mauser in holster.

Kochubey on horseback, with his Mauser in hand, breaks into the theatre.

Kochubey's Mauser is tucked in his belt.

Pelipenko (Mikhail Vasilyev), a commander of a unit of Kochubey's cavalry brigade, holds a Mauser in the scene in the theatre.

Pelipenko fires at Sorokin who is removed from office of the commander-in-chief and accused of treason.

When Sorokin is removed from office of the commander-in-chief, he draws a compact pistol that bears some resemblance with FN Model 1910.

Sorokin draws his pistol but is shot by Pelipenko.

A White soldier with M91 rifle.

Reds with M91 rifles during the battle on the bridge.

A rifle next to dead Red Army man.

Kandybin with a rifle in attack.

Some of Red cavalrymen are armed with anachronistic Mosin Nagant M1938 Carbines.

A man in center raises an M38 Carbine.

A cavalryman at the left carries an M38 Carbine.

One of Kochubey's men holds a carbine during the last stand against Whites.

Maxim M1910/30 machine guns are used by both Reds and Whites.

A Maxim of White troops in action.

A Maxim of White troops in a cover of sandbags.

A Maxim on Red tachanka.

A Maxim of post-1940 version on positions of Red troops, deployed against Kochubey's brigade.

In one scene Chief of Staff Andrey Roy (Sergey Yakovlev) fires a flare pistol. It's hard to identify this gun for sure but the general outlook resembles OSP-30. 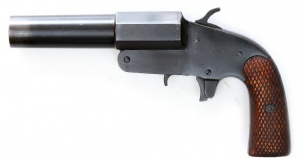 Both Reds and Whites use RG-14/30 hand grenades (possibly mockups).

A White soldier throws a grenade at attacking Red cavalrymen.

A Red sailor at the right carries a grenade.

A Red sailor in center carries a grenade.

Andrey Roy (Sergey Yakovlev) holds a grenade during the last stand against Whites.

During the battle for the bridge Red nurse Natalya (Lyudmila Khityaeva) uses a hand grenade to destroy a Whites machine gun. This is a "pineapple" grenade of unclear model.

A 3-inch gun, abandoned during the retreat of Kochubey's brigade.
Retrieved from "https://www.imfdb.org/index.php?title=Kochubey&oldid=1238820"
Categories: