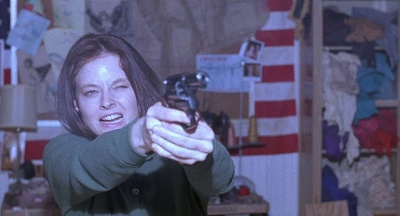 Jodie Foster with her Smith & Wesson Model 13 as Clarice Starling in Silence of the Lambs.

Jodie Foster fires her Kahr K9 as Erica Bain in The Brave One.

Jodie Foster is an American actress who began her career as a child, making several guest starring appearances in such television series as Adam-12, Mayberry R.F.D. and Gunsmoke. As a teenager, she gained prominence for her role as Iris in 1976's Taxi Driver.

Foster received her first Academy Award for Best Actress for her role as rape victim Sarah Tobias in 1988's The Accused, and would later receive her second for her role as Clarice Starling in 1991's The Silence of the Lambs. She has since gone on to star in such films as Flightplan, Panic Room, and The Brave One. She also has directed several films and television episodes including 2016's Money Monster.

N.B. John Hinckley, Jr., the gunman who wounded White House Press Secretary James Brady while trying to assassinate U.S. President Ronald Reagan in 1981, became obsessed with Foster after seeing her in Taxi Driver, and left a note claiming that the assassination was a last-ditch attempt to impress her.