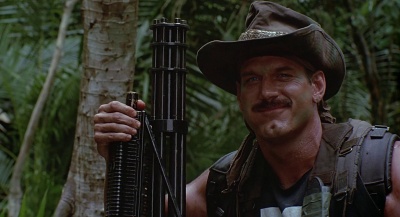 Jesse Ventura is an American actor who first served during the Vietnam War as a US Navy Underwater Demolition Team member (the UDT would later be redesignated as the US Navy SEALs). He then went on to gain fame as a professional wrestler in the World Wrestling Federation under the name Jesse "The Body" Ventura. After appearing in such films as Predator (1987), The Running Man, Ricochet (1991), and Demolition Man, Ventura would enter the arena of politics, which led him to being elected governor of the state of Minnesota from 1999 to 2003.