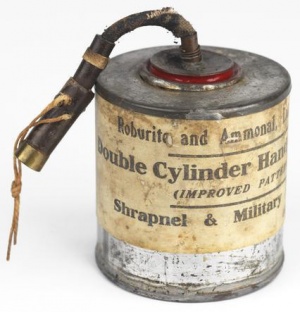 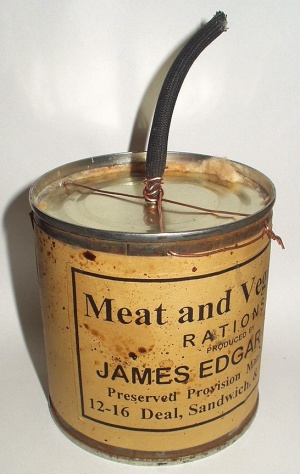 The Jam Tin Grenade was developed by the British during World War One as an emergency replacement after the No. 1 Percussion Grenade was found to be seriously lacking in a number of respects. The history of this grenade is somewhat convoluted leading many people to believe that it was a weapon originally improvised in the field, however this is not the case. The original "Jam Tin Grenade" was one of a number of prototype grenades developed by Col. L. Jackson in late 1914. Two official factory produced models were available from early 1915, the No. 8 (light) and No. 9 (heavy), which differed only in their size with the No.8 being the more common. The No. 8 grenade consisted of an inner tin which held an amount of Ammonal explosive, inside a larger tin with the void being filled by 4 layers of shrapnel balls separated by cast iron rings. Inside the ammonal was a standard No. 8 Mark VII detonator with a length of Bickford fuse protruding from the top of the grenade fitted with a Nobel percussion igniter. This double wall design is why the official name for the original Jam Tin grenade was the "Double Cylinder Hand Grenade".

Even with this simple design production was not able to keep up with demand, so the Royal Engineers developed a set of instructions for soldiers to locally produce their own versions from discarded food tins, and the term "Jam Tin Grenade" was born. In some instances kits were provided, essentially just a sachet of Ammonal high explosive and a fused detonator, but in most cases the grenade were made entirely by the soldiers with scrounged parts and the explosive filler consisting of shredded guncotton. These improvised versions were not as effective as the double cylinder variants produced in factories, however they were far more practical and effective than the alternatives available at the time. They used the same detonator and Bickford fuse, however they lacked the percussion igniter and were instead lit with either a friction igniter, or much more commonly by a burning cigarette or pipe.

The Jam Tin grenade did not see use for long with the British Expeditionary Forces as the Mills Bomb was adopted in May of 1915. However, the Australian and New Zealand forces fighting in the Gallipoli campaign improvised a large number of Jam Tin grenades, as they were seen as a lower priority than British forces fighting on the Western Front and did not receive anywhere the number of Mills Bombs that they needed.