Infinite is a 2021 sci-fi action thriller directed by Antoine Fuqua and based on the 2009 novel "The Reincarnationist Papers" written by D. Eric Maikranz. The film stars Mark Wahlberg as Evan McCauley, an individual who discovers that the hallucinations he's been experiencing are in reality the memories of the past lives he's lived throughout the centuries. The cast includes Chiwetel Ejiofor, Dylan O'Brien, and Sophie Cookson. Originally scheduled for theatrical release by Paramount Pictures in August of 2020, the film would be released digitally on June 10, 2021 on the streaming service Paramount+.

The following weapons were used in the film Infinite:

The operatives following Brathurst 2020 (Chiwetel Ejiofor) are armed with what appear to be modernized FÉG NGM-81 rifles with FAB Defense furniture.

The operatives with their FÉG NGM rifles.

An operative with the rifle that is fitted with an EOTech-style sight.

An operative holds the rifle.

During the shootout with operatives at the mansion, Evan uses a HS Produkt VHS-K2 rifle with an ACOG/RMR stacked optic.

Evan uses a VHS-K2 in a left-handed configuration.

A suppressed Blaser R93 sniper rifle is another weapon used by an operative.

Blaser 93 sniper rifle - 7.62x51mm NATO. This is the commercial version available for sale in the U.S. It does not come with the flash hider and bipod of the tactical version (those items must be purchased separately).

A suppressed Blaser R93 sniper rifle is another weapon used by an operative.

A closeup of the suppressed Blaser R93 sniper rifle.

Nora uses a sniper rifle that appears to be a Remington 700 action mounted on the Cadex Defence Strike Dual rifle chassis.

The sniper rifle is visible on the left.

When she crashes her car into the interrogation room, Nora Brightman (Sophie Cookson) is seen armed with a CZ Scorpion Evo 3 A1 with the stock folded.

Nora Brightman (Sophie Cookson) is seen armed with a CZ Scorpion Evo 3 A1 with the stock folded.

Brathurst 2020 (Chiwetel Ejiofor) uses what appears to be a Single Action Army revolver to play Russian roulette with Evan. Evan later picks up the revolver.

Brathurst 2020 (Chiwetel Ejiofor) uses what appears to be a Single Action Army revolver to play Russian roulette with Evan.

The 5th Generation Glock 17 pistols are used by NYPD officers in the film as well as being the sidearm of Brathurst's operatives. Both Evan McCauley and Nora Brightman are seen using the pistol as well. 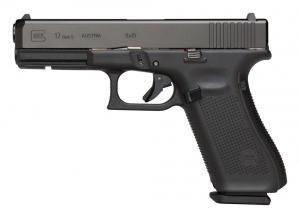