High Security Vacation (Kanikuly strogogo rezhima) is a Russian 2009 adventure comedy directed by Igor Zaytsev. Two convicts escape from prison, one of them, Viktor Sumarokov aka Sumrak, is a seasoned criminal and another one, Evgeni Koltsov, is an unjustly convicted Milistia (Police) detective. With the help of Koltsov's old buddy they hide in a children summer camp where they became supervisors.

In the climactic scene a crime boss "Shaman" (Malkhaz Abuladze) draws a pistol that looks like a Walther P88 Compact but most likely appears to be a blank firing Umarex version of Walther pistol. 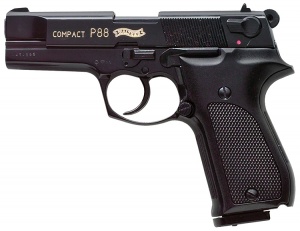 "Shaman" and Koltsov grapple for the pistol.

A guard in prison hospital.

In the firing scene a muzzle brake of AK-74M is replaced with a blank firing adapter.

Maj. Gagaryn (Aleksey Kravchenko), commander of OMON, is seen with an AK-105.