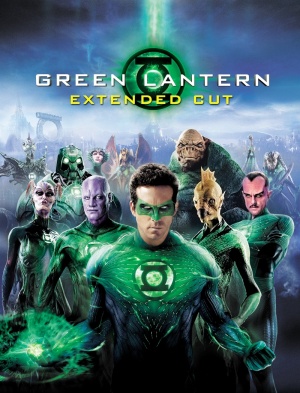 Green Lantern is the 2011 feature film adaptation of the DC Comics series. Directed by Martin Campbell, the film stars Ryan Reynolds as Hal Jordan, a test pilot who confronts an alien being who bestows upon a ring which leads him to join a secret corps of alien races who guard the universe.

The following weapons were used in the film Green Lantern:

Hal Jordan (Ryan Reynolds) is seen using his Green Lantern powers to create an oversized handheld GE M134 Minigun. The weapon is incorrectly shown feeding from and ejecting brass (but no links) from one of the recoil adapter assemblies. In reality the weapon should feed and eject links from the feeder/delinker just below, and eject brass from the bottom of the weapon. Of course, since the weapon is just a manifestation of Hal's will, it doesn't have to function correctly.

Hal Jordan uses the powers of the Power Ring to create a handheld GE M134 Minigun.

Another weapon created by Hal is a quad AAA gun.

Another weapon created by Hal is a quad AAA gun.

Guards are seen attempting to use Taser X2 pistols to take down Hector Hammond (Peter Sarsgaard). 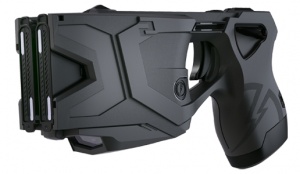 Guards are seen attempting to use Taser X2 pistols to take down Hector Hammond (Peter Sarsgaard).

When Hector Hammond (Peter Sarsgaard) "sees" Amanda Waller's (Angela Bassett), he sees flashes of her past, including the M1911A1 used to murder her family.

In a deleted scene, a police officer is seen firing a Beretta 92FS at an impending threat.

The police officer with his Beretta 92FS.

In a deleted scene, a police officer is seen firing a Remington 870 at an impending threat.

The other police officer with his Remington 870 shotgun.
Retrieved from "https://www.imfdb.org/index.php?title=Green_Lantern&oldid=806749"
Categories: