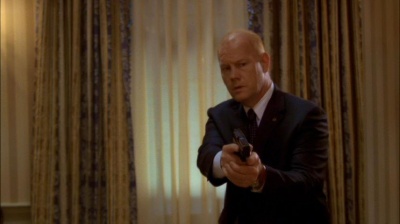 Glenn Morshower as USSS Agent Pierce draws his SIG-Sauer P228 in Season 7 of 24.

Glenn Morshower is an American actor well known to television audiences for his role as Secret Service Agent Aaron Pierce in seven seasons of the original 24. He is often cast in either military or law enforcement roles including such films as Air Force One, X-Men: First Class, Under Siege in addition to four Transformers films.