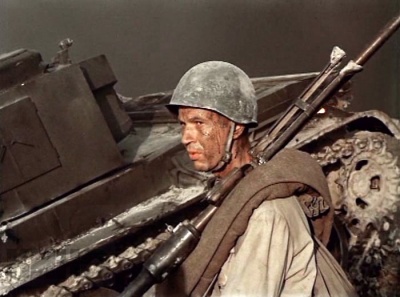 Georgiy Ivanovich Burkov (May 31, 1933 – July 19, 1990) was a Soviet film actor. He started his cinema career in 1966 and appeared in many popular movies, including Liberation film series, Grandads-Robbers (Stariki-razboyniki), They Fought for Their Country (Oni srazhalis za Rodinu), The Garage, and others. Burkov also voiced many animations. He died due to thrombosis, aged 57.

Note: the movie The Red Snowball Tree (Kalina krasnaya) has only a single firearm so it doesn't deserve a page. See screenshots from this film on talk page.