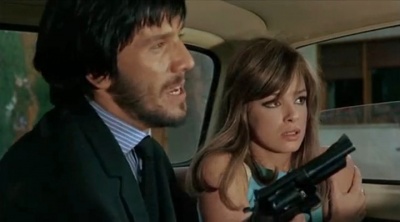 George Eastman aims an Browning Hi-Power pistol as Crane in The Cobra (1968).

Luigi Montefiori, known as George Eastman (born August 16, 1942) is an Italian actor and screenwriter. He started his cinema career in 1967 and appeared in more then 20 movies, mostly spaghetti westerns and B-cinema. His height (6'9" tall) and outlook made Eastman a very familiar face. In late 1980s Eastman quit acting and concentrated on writing though he still occasionaly appears in movies.