General Nil is a Polish 2009 historical drama directed and writted by Ryszard Bugajski. The film based on the life of general Emil August Fieldorf, pseudonym "Nil" (cast by Olgierd Lukaszewicz), which was Deputy Commander of Armia Krajowa, after the failure of the Warsaw Uprising. After the war he organized a revolt against the government, which installed in Poland by the Soviet Union. Fieldorf was executed in 1953 by the Communist Justice.

The following weapons are featured in the film General Nil: 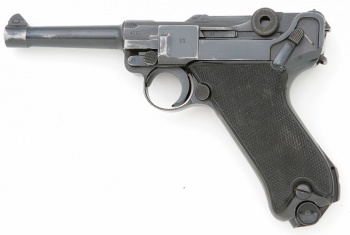 Resistance fighter, who is armed by Sten, is trying to silence the German machine gun.

Soldier with a submachine gun guards the arrested general Fieldorf 'Nil' (Olgierd Lukaszewicz) in the truck.

SS man shoots with rifle at a fleeing resistance fighters.

SS-man fired a MG42 machine gun from the gallery window.