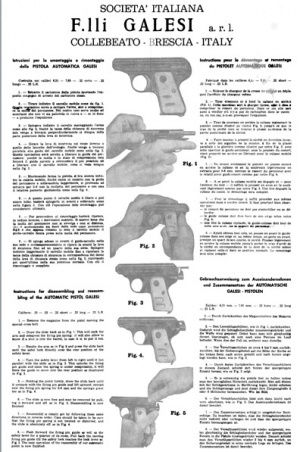 Galesi Arms was an Italian gun manufacturer formally named Industria Armi Galesi which was founded in 1910. It was based in Collebeato, on the northern outskirts of Brescia.

They began to produce their pistols in 1914, following Italy's entry into World War I. The first design was a 6.35mm (.25 ACP) straight blowback design based on the Baby Browning.

Galesi-Brescia also manufactured other small inexpensive semi-auto blowback pistols in the calibers .22 Short, .22 Long, .22 LR and .32 ACP. These show up occasionally in various auction houses and sell for $100–400 depending on condition. The company went out of business in 1991, though similar pistols were produced by the company "Rigarmi", which was opened by Guerrino, one of the sons of the company's founder, Galesi Giuseppe Nicola. Rigarmi is still in operation today.