Frostbite (Swedish Title: Frostbiten) is a 2006 Swedish horror film directed by Anders Banke, filmed with some Russian assistance (in Russia, it was released as "30 days before dawn"). During World War II in Ukraine, 1944, the remnants of 5th SS Panzer Division Wiking are fleeing from the Red Army. They seek shelter in an abandoned cabin, but as darkness falls, they are attacked by vampires. In the present-day, a medical doctor named Annika and her 17-year old daughter Saga move to a small town in northern Sweden after Annika is hired by the local hospital. Annika is keen to work with her idol, geneticist Professor Gerhard Beckert. However Beckert's sinister past in the Waffen-SS soon catches up with him when a couple of pill-popping interns mistake an experimental vaccine for party drugs. Mayhem ensues as the town's teenagers succumb one by one to the mysterious virus.

The following weapons were used in the film Frostbite:

Policewoman Mona (Anna Lindholm) carries what appears to be the SIG-Sauer P226 as her duty sidearm. It is worth noting that SIG-Sauer pistols of various models are the real standard weapons of the Swedish police. 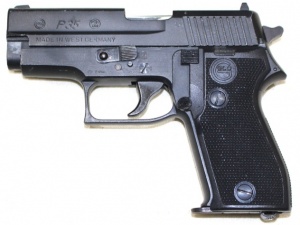 German Army soldiers are armed with the Karabiner 98k at the beginning of the film.

Karabiner 98k at the left.

Numerous German Army soldiers are armed with the MP40 at the beginning of the film.

A Nazi soldier fires his MP40.

One policeman can be seen with a Benelli 121 (this series of shotguns is also known as the SL 80).

A policeman loads the Benelli 121. The officer behind him is wearing a flipped-up Huvudskydd m/69 bulletproof mask which was the standard of the Swedish police from 1969 up until modern times.

The inscription "Benelli 121 Made in Italy" is vague but visible. It is worth noting that not every Benelli of this series has such a marking, but they can still be identified by the unique receiver.

One German army soldier carries the Panzerfaust in the film's beginning.