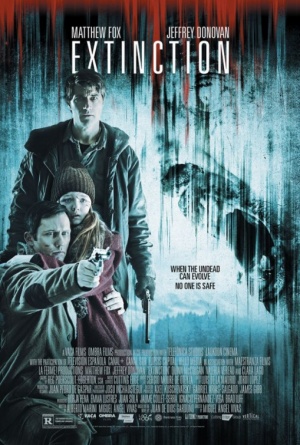 The following weapons were used in the film Extinction:

Patrick (Matthew Fox) uses a Colt King Cobra near the end of the film when zombies attack the house. He also uses it when he creates a diversion holding a flare leading the zombies away from the house so Jack and his daughter Lu and a woman escape in a truck. 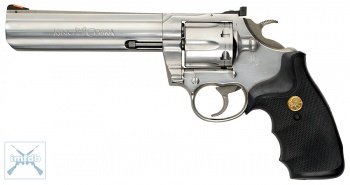 Patrick aims his Colt at a radio.

Patrick fires his Colt during the climactic assault on the house. Note the European proof marks on the barrel.

Jack (Jeffrey Donovan) uses a stainless steel Taurus Model 689 as his personal handgun throughout the movie. 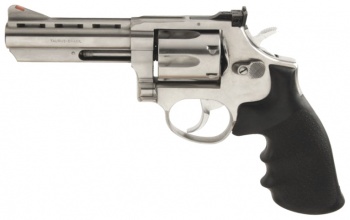 With the house under siege Jack has his Taurus at the ready.

In the prologue, Jack (Jeffrey Donovan) uses a Beretta 92FS that he takes from an infected soldier.

Jack fires the Beretta at an infected.

Patrick (Matthew Fox) uses what appears to be a Black furniture SKS rifle at the beginning of the film while hunting. It seems to be equipped with a scope & suppressor.

Russian Simonov Type 45 aka the Russian SKS rifle - 7.62x39mm. The Russian SKS has a milled receiver and a blade bayonet. The rifles were issued with hardwood or laminated stocks. This example has a hardwood stock.

Jack (Jeffrey Donovan) is armed with a Marlin Model 336 in the film.

Patrick (Matthew Fox) uses what appears to be a Remington Model 700 rifle.

Patrick with the rifle.

Patrick uses what appears to be a AKS-74 assault rifle in the final battle as the zombies attack the house. This assault rifle has a black Mako fore grip in front of it but he fires it out the window on fully automatic holding onto the magazine instead of the fore grip.

Patrick is shooting his AK at the zombies and for some reason, he holds it by the magazine instead of the foregrip.

Jack uses an M4A1 Carbine that he picked up from a dead soldier and uses it to shoot the two zombies attacking his wife in the jeep.

Jack (Jeffrey Donovan) and Patrick (Matthew Fox) use a MagTech MT 586 shotgun with an extended magazine during the final battle when the zombies attack the house.

The shotgun lies at Jacks' feet during a particularly intense moment of the attack.