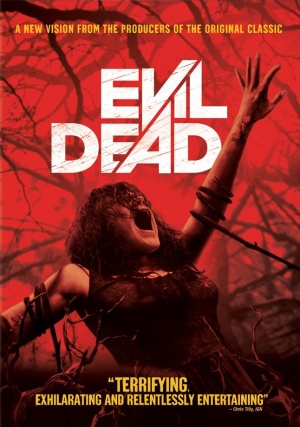 Evil Dead is the 2013 horror film that is the fourth installment in The Evil Dead series. This film was written and directed by Fede Álvarez and serves a semi-reboot. Sam Raimi and Bruce Campbell return to this film as producers.

The following weapons were used in the film Evil Dead (2013):

12 Gauge Side by Side Shotgun

In a tribute to the original trilogy of films, a 12 Gauge Double Barreled Shotgun is seen used in the film. This gun was used by Mia Allen (Jane Levy) and David Allen (Shiloh Fernandez). Eric (Lou Taylor Pucci) and Olivia (Jessica Lucas) also holds it. This shotgun previously was used by Harold (Jim McLarty).

The Stoeger IGA 20" Coach side by side Shotgun - 12 gauge. A close version, despite a slightly different shape of the receiver.

The man holds the shotgun.

Harold aims his shotgun after firing it.

The shotgun is seen.

The better view of the receiver, while Mia holds her weapon single-handed.