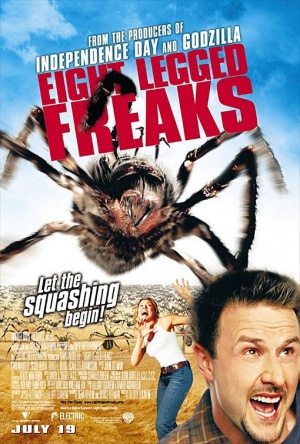 The following weapons were used in the film Eight Legged Freaks:

Deputy Pete Willis (Rick Overton) carries a Beretta 92FS as his sidearm. Offscreen Sam Parker gives Chris one before they entered the storage room. He had no choice but to drop it when he and his aunt Gladys Eileen Ryan are confronted by a big spider.

The Beretta 92FS is used on the spider.

Sheriff Samantha Parker (Kari Wuhrer) keeps a Remington 870 in a gun case for home defense and ends up using it throughout the film. In a continuity error, Harlan Griffith (Doug E. Doug) is seen holding an 870 when he earlier had a different shotgun with a longer barrel. 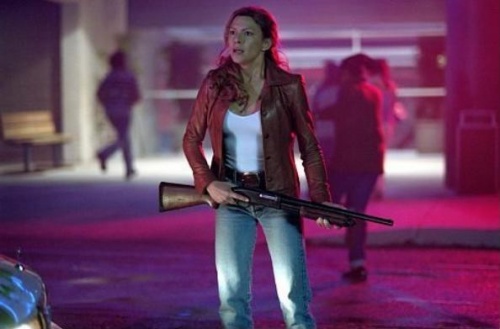 Sam holds the Remington at the ready as she and the rest of townsfolk brace for the onslaught.

Sam reloads the shotgun and is seen handing it off, but it seems to turn into a double barreled shotgun.

Sam tries to get Pete (Rick Overton) to come to her while holding her Remington 870.

Sam points her Remington 870 at a giant tarantula trying to get through.

Chris McCormick (David Arquette) is given a 12 Gauge Double Barreled Shotgun by Sam. The gun is later seen in the hands of an elderly citizen who is wearing a grey shirt.

The citizen on the left holds the double barreled shotgun behind Chris and Sam.

Willis opens fire on the spiders with his Mossberg.

Chris McCormick (David Arquette) is seen with a Mossberg 500 Cruiser shotgun with a saddle shell holder.

A Winchester Model 1894 is one of the rifles that Deputy Pete Willis (Rick Overton) takes from the police station and used by one of the townspeople.

Harlan Griffith (Doug E. Doug) is seen holding a Remington 760 during the standoff in the mall. However in a continuity error it's constantly switching in and out with a Remington 870 shotgun.

Harlan Griffith (Doug E. Doug) is seen holding a Remington 760 rifle during the standoff in the mall. Note the magazine on the bottom of the receiver.

Harlan with the Remington 760 on the roof.

The Lee Harvey Oswald rifle... Why we have that, I do not know.

Oswald's gun... man, this is the weirdest day of my life!

Norman the maintenance guy behind Sam holds the Springfield.