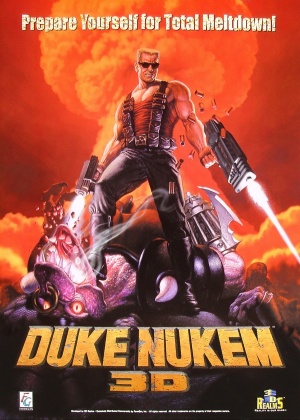 A Glock 17 pistol with an extended 'buffer' and an unusable under-barrel laser sight appears in the game, simply called the "Pistol". Like a lot of 1990s FPS games, it can be fired continuously like a fully-automatic weapon by holding down whatever button is bound to fire your weapon, albeit at a slow rate of fire. Its pickup sprite does not appear to have been based on a Glock and seems to be completely generic.

It is the only weapon in the game that must reload magazines rather than drawing from a single ammunition pool, but instead of tracking remaining magazines, the game will instead make Duke reload whenever the ammunition count is a multiple of 12 (the weapon's magazine capacity). However, the gun's maximum ammunition count is 200, meaning Duke can carry 16 full magazines and a partially-loaded one with 8 rounds, and he will use up the latter first (unlike later FPS games which, after reloading a weapon using box magazines, will usually only load a partially-full one if it is the only one left).

Pistol ammunition can be found as loose magazines in the game's levels, and is often dropped by Assault Trooper enemies (the most common hostile NPC in the game), despite the fact that they don't actually use this weapon. 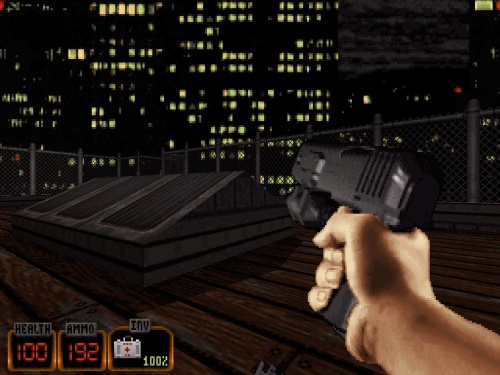 Duke Nukem reloading his Glock 17. Given Duke's stature in official promotional artwork, the implied size and bulk of this gun sppears to be on the order of a Desert Eagle or larger.

A Browning Hi-Power with an under-barrel LAM replaces the Glock 17 in Duke Nukem 64, the N64 version of the game. Other than its sprites, it is identical in function to the pistol of the PC version, including an ammo capacity of 12 rounds. 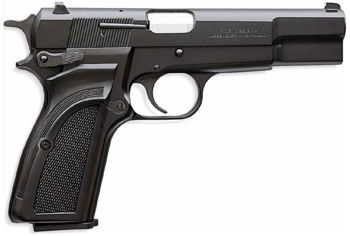 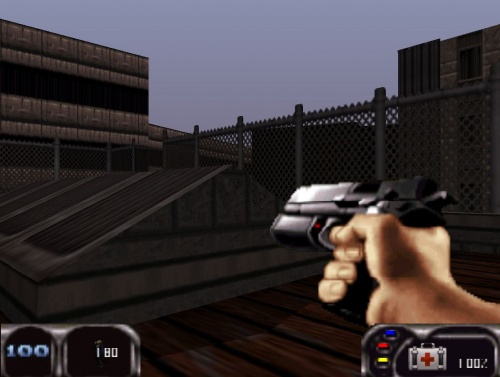 The Hi-Power mid-reload in Duke Nukem 64.

The shotgun is a black Winchester 1300 Defender with front and rear Tacstar pistol grips and a heat-shield; this differs from the version shown in previews, which was described by unimpressed videogame journalists as resembling a grey banana. 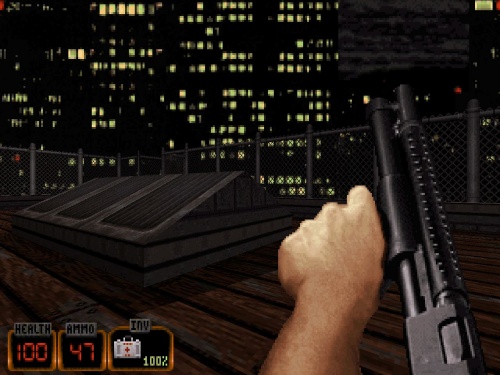 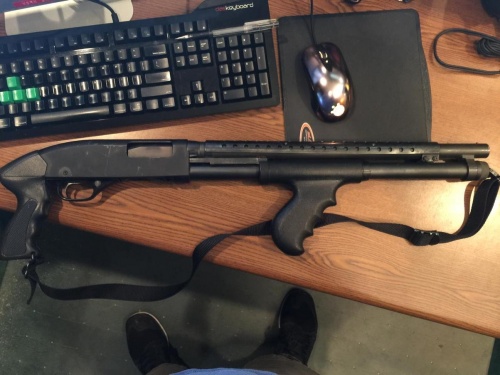 The actual Winchester 1300 Defender which was digitized for Duke Nukem 3D. From George Broussard's Twitter. 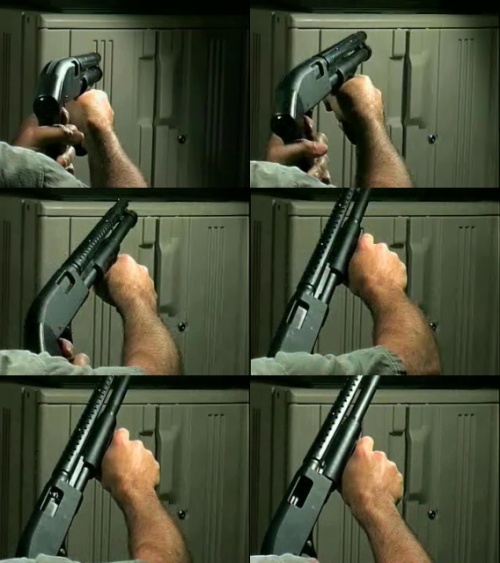 These frames are photographs of the actual Winchester 1300 Defender which was digitized for Duke Nukem 3D. 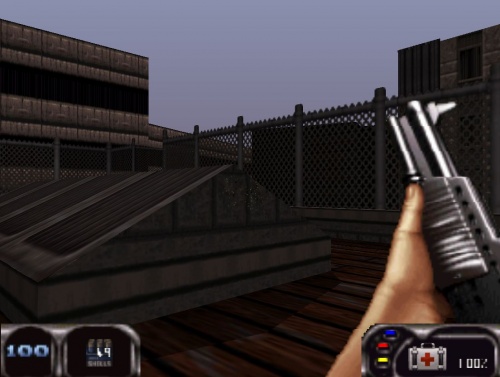 Pumping the SPAS-12 in Duke Nukem 64. Note that the pump is much smaller compared to the real weapon.

The Chaingun Cannon (sometimes called the "Ripper") is a three-barrel "salvo rifle" loosely based on the Russian Pribor-3B assault rifle. It is equipped with a side grip and some sort of unusable radar display.

Third-person sprite of the Ripper. 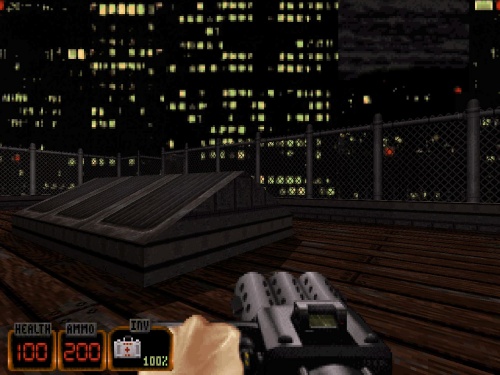 The Ripper Chaingun as seen in first-person. 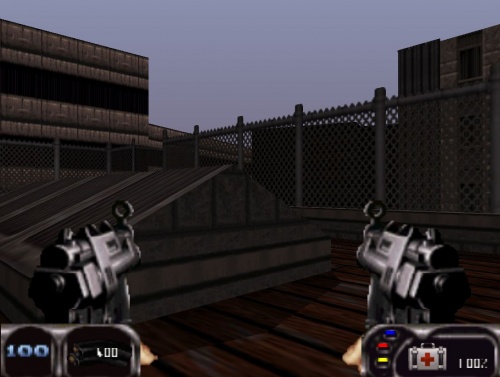 A handheld minigun with 8 barrels are seen used by the Lizard Troopers. 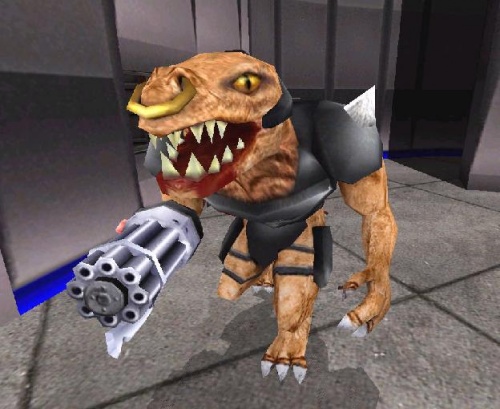 Again, a handheld minigun but a heavier variant with an under-barrel grenade launcher is seen used by the Battlelords. 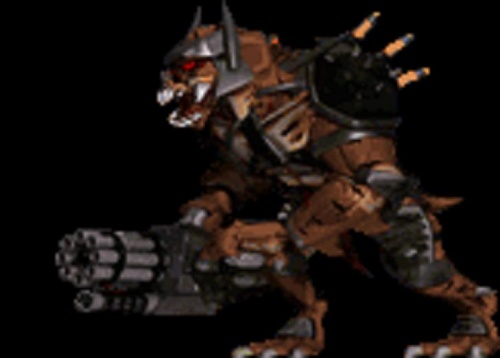 The RPG is a fictional automatic rocket launcher. 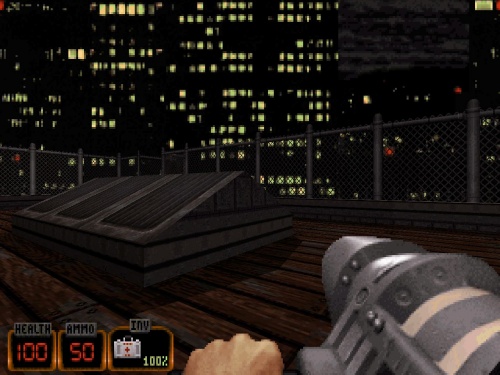 The "RPG" in first person.

The Grenade Launcher replaces the RPG in Duke Nukem 64. It is a revolving grenade launcher that somewhat resembles the Hawk MM1 grenade launcher, and fires grenades that explode on a three-second timer.

The Missile Launcher replaces the Devastator in Duke Nukem 64, functioning similarly to the RPG in the PC version. 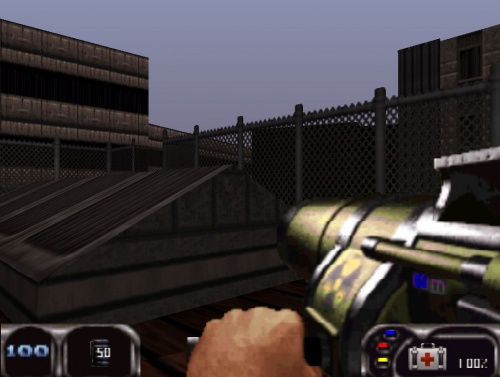 The Missile Launcher in Duke Nukem 64.

The Pipe Bomb is a remotely-detonated explosive. 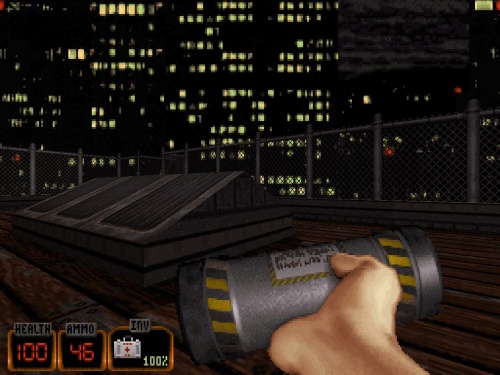 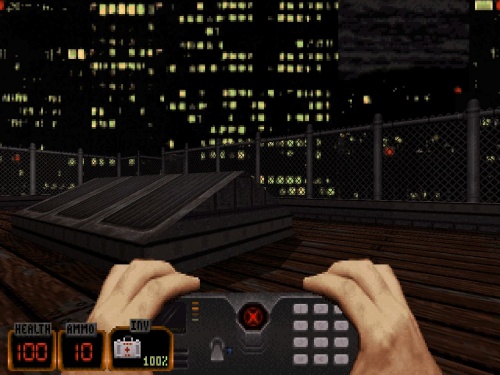