Dolan's Cadillac is a 2009 Canadian thriller drama based on a novella by Stephen King. The film tells the story of a school teacher (Wes Bentley) who plots revenge on a ruthless gangster (Christian Slater) who murdered his wife.

The following weapons were used in the film Dolan's Cadillac:

Gangster Jimmy Dolan (Christian Slater) carries a Smith & Wesson 5906 as his sidearm throughout the film. He most notably wields it during the beginning of the film, killing two of his henchmen.

Jimmy Dolan (Christian Slater) fires his 5906 at his henchman.

Dolan finishes off another one of his henchmen.

Dolan holds his 5906 inside the pothole.

Dolan dual-wields his 5906 with the Chief's Beretta.

Tom Robinson (Wes Bentley) buys and carries a Smith & Wesson Model 460 throughout the latter part of the film. He trains with it several times, planning to avenge his wife's death. At one point, Dolan takes this hand cannon from Robinson, but decides to leave the gun to him. Looking at this, you might initially think of the same X-frame Smith & Wesson Model 500, the but shape of the muzzle brake is different. Note how this is an extremely poor choice for a first gun, and a pretty expensive and impractical one at that. Robinson only wants the gun because it's "three times as powerful as Dirty Harry's", so as to almost be sure that he would be able to kill Dolan with it. The first time Robinson fires the gun, it literally knocks him to the ground and the hydrostatic shock from the .50-caliber projectile is so intense that it dislodges part of a dirt hill at the shooting range. It should also be noted that there is a view down the barrel during this scene and there is no rifling present. 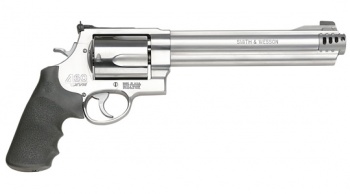 The Model 460 lies on the gun store counter.

Robinson fires his revolver near the end of the film.

Chief (Greg Bryk), Dolan's bodyguard and right-hand man, carries a Beretta 92FS as his sidearm throughout the film. Dolan also wields Chief's Beretta near the end of the film.

Chief (Greg Bryk) holds his Beretta next to Dolan.

Dolan dual-wields his 5906 with Chief's Beretta.

When Tom Robinson (Wes Bentley) goes to the gun store, he briefly holds a stainless steel Smith & Wesson Model 64 revolver (identifiable by the cylinder release latch). He considers buying it, but decides against it because he asks for a gun three times as powerful as Dirty Harry's .44 Magnum Model 29, which is what leads him to the Model 500 in .500 S&W Magnum. 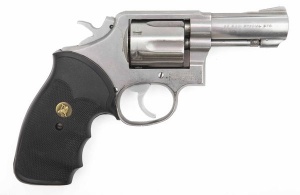 A Heckler & Koch MP5A2 can be seen in a poster outside a gun store.

A Heckler & Koch MP5A2 in a poster outside a gun store.

One of the rival gangsters uses a semi-automatic Franchi SPAS-15 shotgun to fire at Dolan's bulletproof Cadillac, to no avail.

The gangster fires his SPAS-15.

The gangster racks the action of the shotgun.

A rival gangster uses a Heckler & Koch G36K fitted with a red-dot sight to fire at Dolan's bulletproof Cadillac, in an attempt to take over his business.

The gangster fires his G36K.

One of the rival gangsters uses a Colt Model 727 fitted with an underbarrel M203 grenade launcher to fire at Dolan's Cadillac.

In the gun store, there are several rifles and handguns on display, but none are ever seen clearly enough to identify them.

There are several rifles behind Robinson.

Several handguns are on display.
Retrieved from "https://www.imfdb.org/index.php?title=Dolan%27s_Cadillac&oldid=1375110"
Categories: