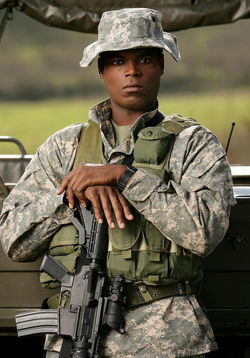 Demore Barnes as Sgt. Hector Williams with his M4 on The Unit.

Demore Barnes is an Canadian actor well known for his roles as Sgt. Hector Williams in CBS series The Unit , the archangel Raphael in the CW series Supernatural. and NYPD Deputy Chief Christian Garland in the NBC series Law & Order: Special Victims Unit. He has also appeared in such films and television series as 12 Monkeys and Titans. In addition, he has also voiced Vicente "Capitão" Souza from Rainbow Six Siege