Delta Force 3: The Killing Game is the third film in The Delta Force trilogy. While Chuck Norris did not return for the 1991 sequel, The Killing Game does feature his son Mike Norris as well as new cast members Eric Douglas and Nick Cassavetes. Like the original film, this feature was produced in Israel, thus a more unusual set of weapons were seen used.

The following weapons were used in the film Delta Force 3: The Killing Game:

The Mini Uzi is used throughout the film. 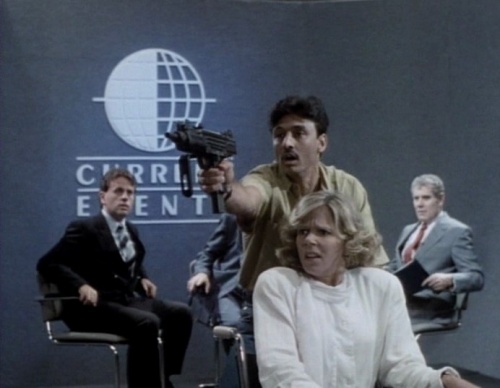 The Mini Uzi is pulled during a broadcast. 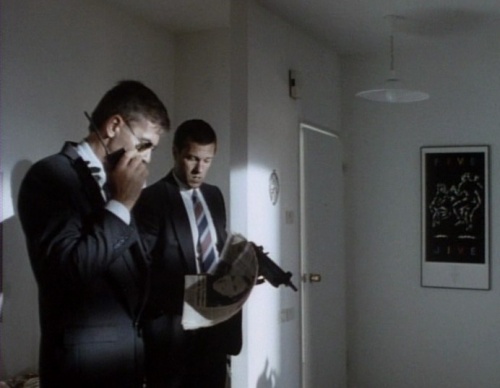 The agent on the right holds the PM-63.

The Browning Hi-Power with a suppressor is the handgun used by Charles (Nick Cassavetes). 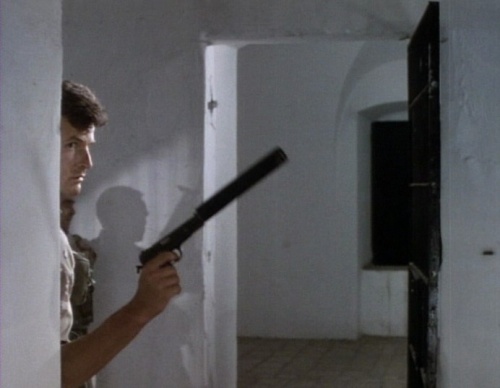 The Browning Hi-Power with a suppressor is used by Charles (Nick Cassavetes).

A Walther PP is carried by Sergei (John Saint Ryan). 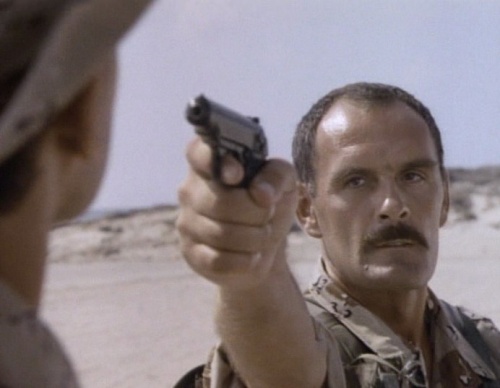 A Walther PP is pulled by Sergei (John Saint Ryan).

The militants are all armed AK-47-type rifles in the film. 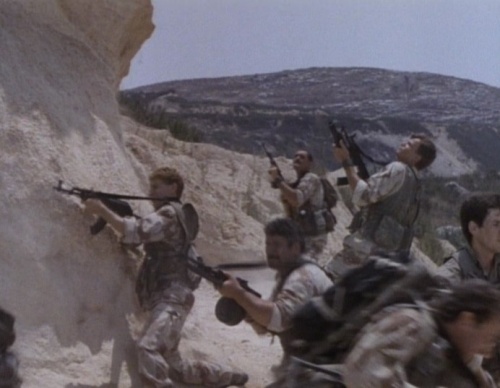 The rifle is seen at the left. 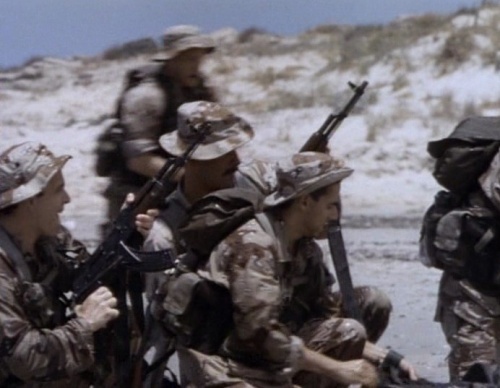 The operators ready their rifles.

Some of the AK rifles used in the film have an extended muzzle nut visible. They are the BFAs (Blank Firing Adapters) used mostly by Israeli movie armorers. American movie armorers use blank firing adapters that are either hidden in the barrel or look just like the existing compensators or flash hiders on the issued firearms. Much like the 1988 film The Beast of War, these obvious BFAs indicate that a film was shot in Israel. 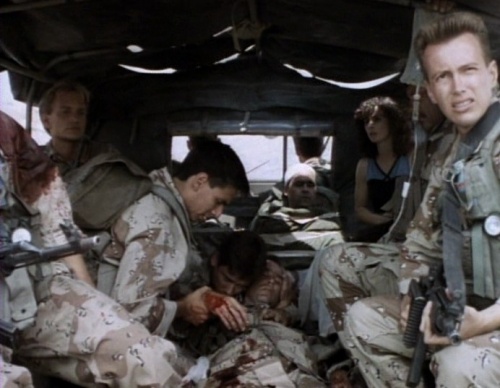 The rifle on the left is fitted with the blank adapter.

Galil ARM rifles are seen in the hands of Delta Force soldiers. 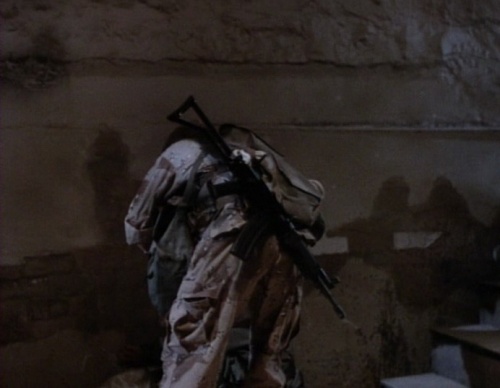 Galil SAR rifles are also seen in the hands of Delta Force soldiers during several instances in the film. 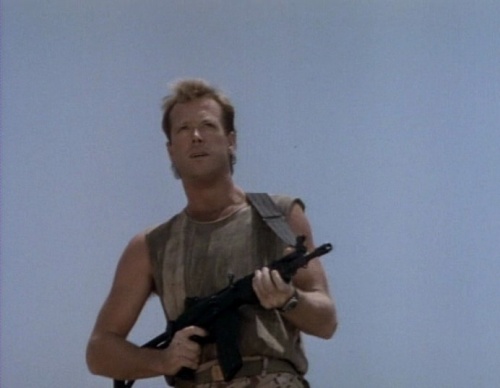 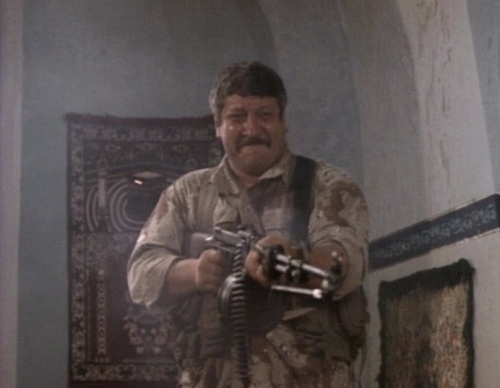 The FN MAG is used by Delta Force. 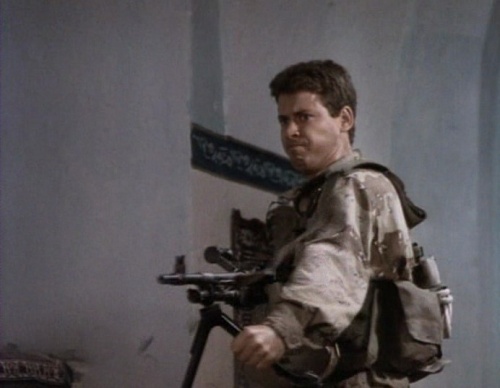 A Galil SAR with an M203 grenade launcher is carried by Charles (Nick Cassavetes). 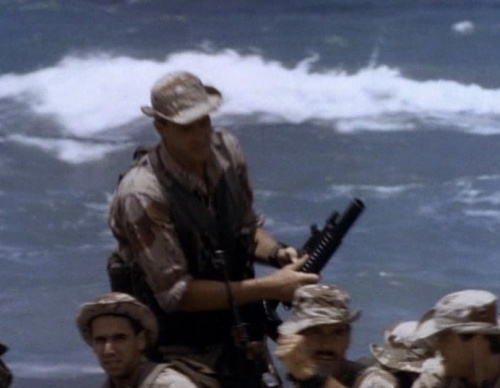 A Galil SAR with an M203 grenade launcher is carried by Charles (Nick Cassavetes).

A Galil SAR with an M203 grenade launcher is seen at the right.

A Mills Bomb is used. 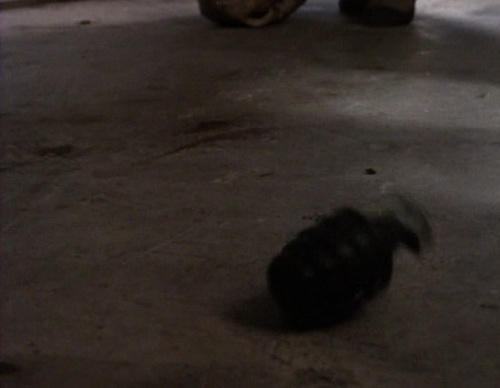 The bomb is tossed on the floor.
Retrieved from "https://www.imfdb.org/index.php?title=Delta_Force_3:_The_Killing_Game&oldid=1380683"
Categories: