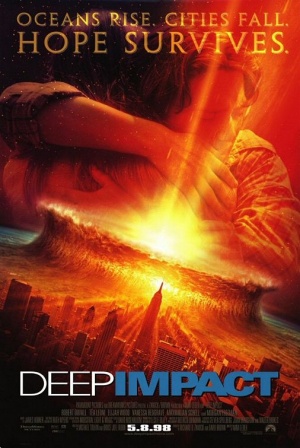 Deep Impact is a 1998 disaster film that follows the lives of several people as they react to the threat of a rogue comet on a collision course with Earth and the space mission launched to intercept it. The film was released only a month before the similarly-themed Bruce Willis film Armageddon.

The following weapons were used in the film Deep Impact:

Early on in the film, US federal agents that bring MSNBC reporter Jenny Lerner (Téa Leoni) to the White House to meet with President of the United States Tom Beck (Morgan Freeman) can be seen armed with SIG-Sauer P226 pistols as their sidearms, one of which is brandished by an Agent prior to the President arriving.

Later on in the film, U.S. Army soldiers at the ARK site in Missouri can be seen armed with M16A2 rifles as their standard weapons.

The M4A1 carbine is seen in the hands of US military personnel standing watch in the guard tower above the ARK site.

An M4A1 is seen in the hands of a US military soldier standing watch in the guard tower above the ARK site.

The U.S. Army soldiers that take Leo Biederman (Elijah Wood) and his family to the ARK site can be seen armed with Colt Model 727 carbines fitted with M203 grenade launchers.