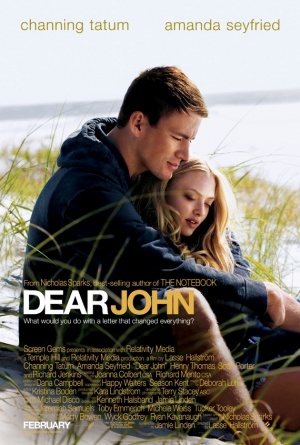 Dear John is a 2010 romance starring Channing Tatum as a Special Forces soldier who begins a long distance relationship by corresponding by letter with a young college student (Amanda Seyfried). The film is based on a novel by Nicholas Sparks (the author of The Notebook and The Lucky One).

The following weapons were used in the film Dear John:

The M4A1 is the main weapon carried by Special Forces Sgt. John Tyree (Channing Tatum) as well as the majority of his Special Forces team. They are seen during his missions in Iraq and Afghanistan, and are equipped with ACOG or M68 Aimpoint red dot scopes, AN/PEQ-2 IR designators, RIS foregrips, and camouflage paint schemes.

John cleaning his M4A1 while waiting for a letter from Savannah.

While on patrol in Iraq, John and a teammate advance with their M4A1s.

John checks out a disturbance while armed with his M4A1.

US soldiers are seen armed with M16A2s when they dismount a truck in Iraq.

US Troops are seen armed with M16A2s when they exit a truck in Iraq. This appears to be footage taken from the movie Jarhead as evident by the Desert Storm-era uniforms.

An insurgent with a Norinco Type 56 opens fire on Sgt. Tyree and his team.

AKMs are seen in the hands of African soldiers who train with Tyree.

An African soldier holds an AKM during a lesson.

Another Special Forces member is seen armed with a M249 Paratrooper.

The Browning M2HB is seen mounted atop the Special Forces Humvees, with and without gun shields.

A pair of Humvees armed with Browning M2HB heavy machine guns, the one in back fitted with a gun shield. Nearby, an Afghan soldier working with the US troops as a translator holds an unidentifiable AK variant.
Retrieved from "https://www.imfdb.org/index.php?title=Dear_John&oldid=1442325"
Categories: