Dead Rising 2 is a zombie action-adventure developed by Capcom, released in 2010. Set five years after the original Dead Rising, the motocross champion Chuck Greene finds himself in a zombie infested Fortune City. After getting to the sole reinforced shelter he sets out to figure out who framed him for the outbreak and to retrieve the anti-zombification vaccine Zombrex every 24 hours in order to save his daughter.

The following weapons appear in the video game Dead Rising 2: 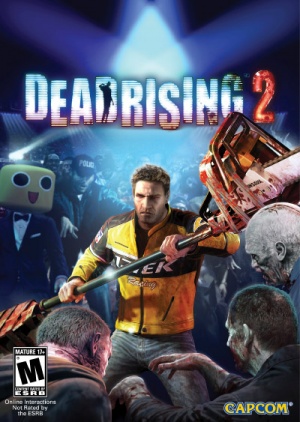 A stainless steel CZ 75B can be wielded by Chuck. Noted by the front and rear slide grooves, high profile of the frame, and two-handed trigger guard. This is the only pistol in the game. It has a 30 round capacity. 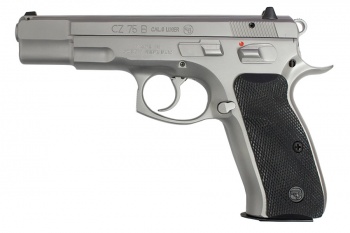 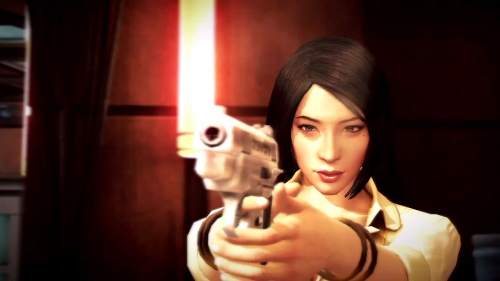 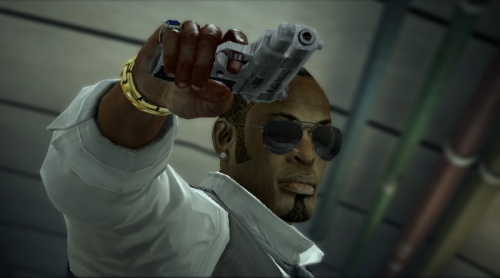 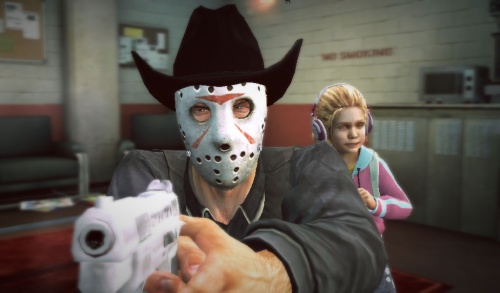 The protagonist, Chuck, wielding the CZ 75 in Case 7-3 "What Lies Beneath".

In the side mission WWJWD, a crazy sheriff has an engraved Single Action Army. It holds 60 bullets and can be picked up once he dies.

Chuck toys around with the SAA in the High Noon Shooting Range. 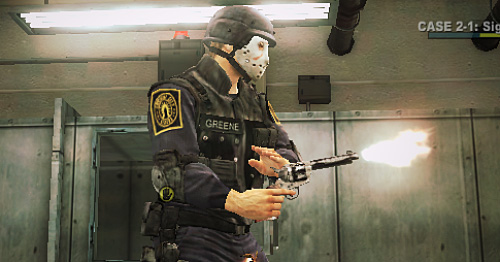 Chuck rapidly fans the SAA just outside the safe house.

The Maverick Model 88 appears in the game with a silver heat shield. The Maverick has it's safety located on the trigger guard, unlike the Mossberg 500, where it is placed on top of the receiver. One of the combo weapons, known as the "Boomstick", is equipped with a taped-on Pitchfork. It also appears in the Dead Rising 2: Case Zero Debut trailer.

Chuck holds the "Boomstick" just outside the safe house.

A Colt AR-15A2 Government Carbine appears ingame, modeled with a six position collapsible stock and twenty round magazine, although Capcom wouldn't let a little thing like that stop it from holding 60 shots at a time. 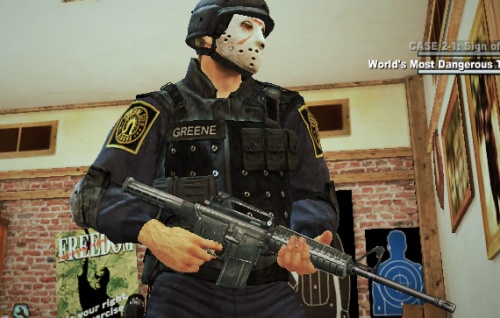 Greene holds the AR-15A2 Government Carbine inside the High Noon Shooting Range. Note the right side of the weapon is a mirror of the left.

Three SIG SG 552s are seen attached to a wheelchair and called the "Blitzkrieg". One has a sight attached and the other has a side-loading magazine. Called the "Merc assault rifle", has a 30 round magazine and is fitted with a scope and a vertical grip. The weapon is usually carried by the mercenaries the player has to face. 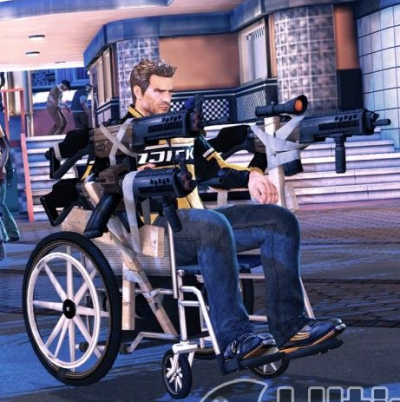 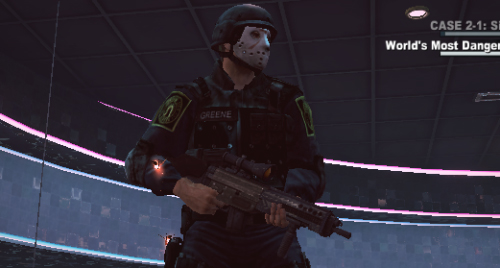 Chuck Greene holds a SIG SG 552 in the Atlantica Casino. 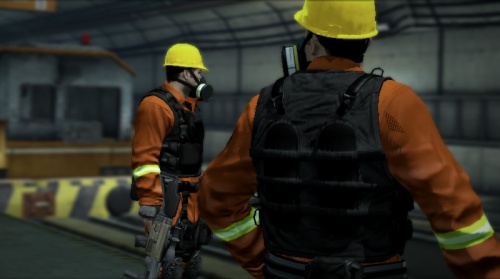 The M82A1 Barrett .50CAL appears in the game simply as the "Sniper Rifle". It is the main weapon of the four Hunters Chuck encounters on the rooftops around the Royal Flush Plaza. The weapon is modelled without a charging handle. It incorrectly holds 20 rounds. 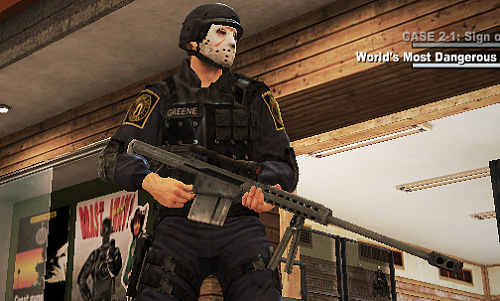 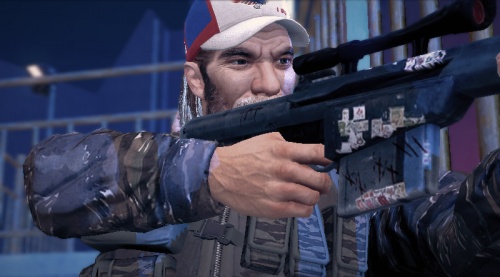 Earl, one of the four Hunters, aims his M82 after taking out a survivor.

Called the "LMG", it can be found in numerous locations throughout the game. It holds 200 rounds in a 100-round drum, is the standard weapon of Dwight Boykin and is part of two combo weapons. 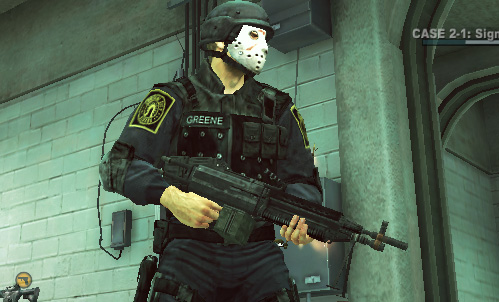 Greene holds the M249 in the safe house. 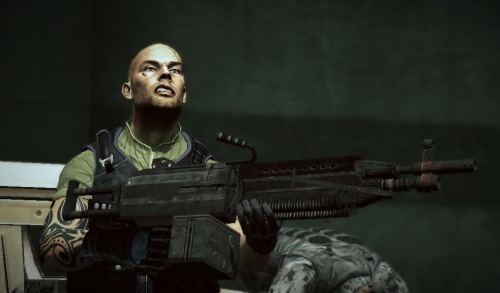 Used by Sergeant Dwight Boykin, and found in limited numbers throughout Fortune City.

Chuck holds one of the Mk 2 fragmentation grenades. 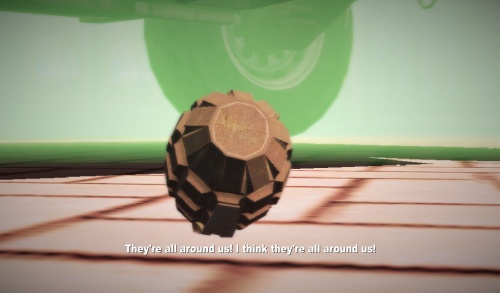 A grenade rolls across the pavement in Case 6-1 "Help Arrives" as the Army men are overwhelmed by the gas zombies. 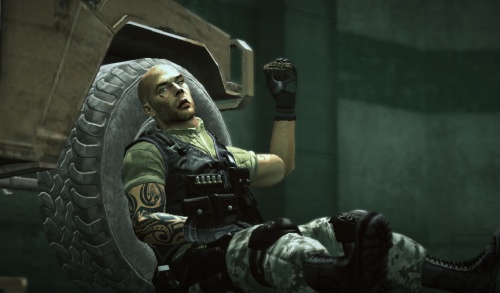 Boykin commits suicide with a Mk 2 in Case 6-2 "Last Stand".

Found throughout the game and can be combined with various objects to create improvised weapons. 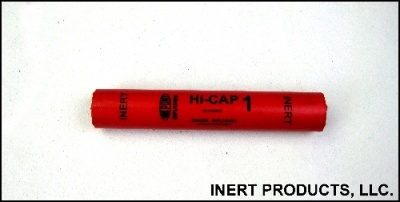 Chuck prepares to throw a stick of dynamite. 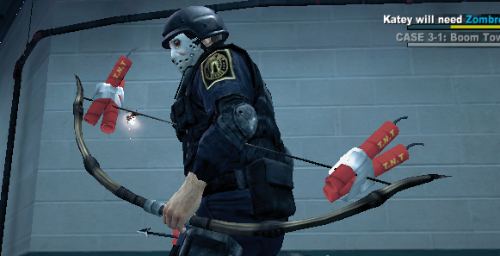 Chuck holds the Blambow outside one of the Workshops.

Colt Walkers can be seen on a sign used at a casino. 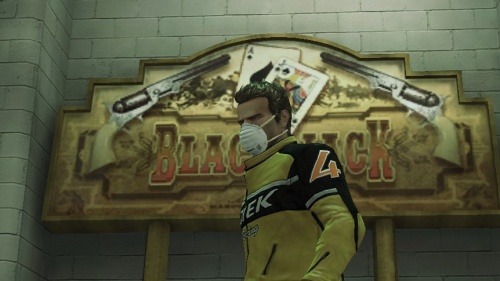 The United States Army soldiers can be seen carrying Colt M4A1 Carbines as they arrive in Fortune City in Case 6-1 "Help Arrives". Oddly enough these rifles are modeled with the right side being a mirror of the left. 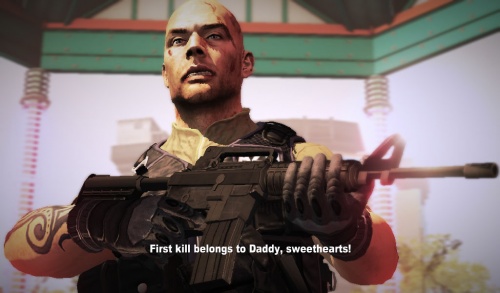 Dwight Boykin takes an M4A1 Carbine from one of his men. 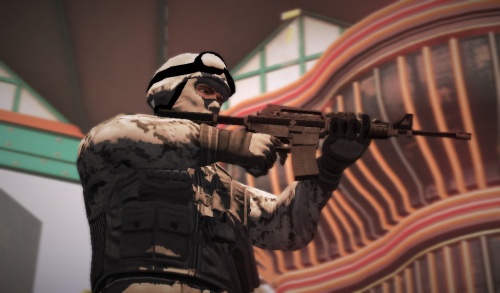 A soldier fires his M4A1 Carbine at the zombies during the initial clean-up.

The helicopter in Case 5-2 "The Getaway" has a GE M134 mounted on its side. Oddly, the gun appears to be based on a hand held M134 Minigun, having a forward "chainsaw" grip and single rear vertical grip. 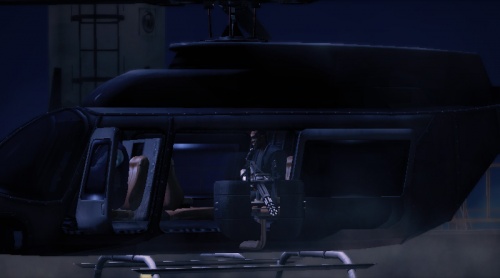 The chopper attempts to lift off after Chuck has been spotted.
Retrieved from "https://www.imfdb.org/index.php?title=Dead_Rising_2&oldid=1284346"
Categories: