Dallas Buyers Club is a 2013 biographical drama film directed by Jean-Marc Vallée. Matthew McConaughey stars as Ron Woodroof, a Dallas electrician and rodeo cowboy who is diagnosed with AIDS in 1985. To combat his illness and prolong his life, Woodroof is forced to go around the system to secure antiretroviral drugs from Mexico, eventually establishing the "Dallas Buyers Club" to provide the drugs to others with HIV/AIDS. McConaughey won the 2013 Academy Award for Best Actor for his performance as Woodruff, while Jared Leto won the Academy Award for Best Supporting Male Actor for his role as Rayon, a transgender AIDS patient who helps Woodruff with his business.

The following weapons were used in the film Dallas Buyers Club:

Ron Woodroof (Matthew McConaughey) owns a two-tone Beretta 92FS pistol throughout the film, which is most prominently seen when he contemplates committing suicide. 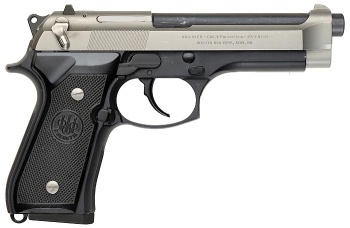 Two-Tone Beretta 92FS - 9x19mm. This has a Stainless Slide on a standard Frame & Barrel.

Woodroof pulls out the Beretta.

The Beretta lies on a table in Woodroof's office.

Woodroof pulls out a Mitchell High Standard shotgun from his car trunk and uses it to shoot at his trailer after he is evicted for having AIDS.

Woodroof opens fire on his trailer.
Retrieved from "https://www.imfdb.org/index.php?title=Dallas_Buyers_Club&oldid=1429794"
Categories: