Cry of a Prostitute (original title Quelli che contano, "Those who count") is a 1974 Italian crime movie directed by Andrea Bianchi. A hired gun Tony Aniante (Henry Silva) returns to his native town in Sicily after many years in America and finds it ripped by a feud of two mafia bosses. Working for both sides, Aniante leads them to mutual destruction. The story has many similarities to such well known movies as Akira Kurosawa's Yojimbo and Sergio Leone's A Fistful of Dollars.

The following weapons were used in the film Cry of a Prostitute (Quelli che contano):

Don Turi Scannapieco's (Mario Landi) personal firearm is a nickel-plated Smith & Wesson Military & Police revolver. After Don Turi is killed, his revolver is taken by Carmela who gives it to Zino (Alfredo Pea), Don Turi's grandson. Zino in turn passes the revolver to Tony Aniante (Henry Silva) who uses it in the climactic scene. 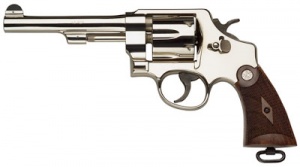 Zino holds the revolver. A grip with a lanyard ring is seen.

An M&P revolver is seen in a flashback scene of the murdering of Tony's parents. It seems to be a different movie prop as it has plain grips unlike Don Turi's revolver.

In several scenes, Don Ricuzzo's henchmen carry Smith & Wesson Model 36 revolvers (some of them may be Riva Esterina Dobermanns).

Another Don Ricuzzo's henchman draws his revolver during the bar fighting with Toni Aniante. This revolver can be a Riva Esterina Dobermann as it seems to have a high profile front sight.

A close view of the revolver. It appears to be an original Model 36 rather than Dobermann.

A snub nose revolver is seen in a flashback scene of the murdering of Tony's parents.

A close view of the pistol in the night scene.

A firing Luger is seen in a flashback scene of the murdering of Tony's parents.

Don Cascemi threatens Tony with his own pistol.

Don Ricuzzo's henchman holds his pistol during the attempt to kidnap Don Cascemi.

The muzzle is seen in the same scene.

Don Turi's henchman carries a pistol tucked at his belt.

The same characters hits Toni Aniante with his pistol.

In the final scene several hitmen, sent by Capo di capos (the "bis boss" of mafia), are armed with Beretta M1951 pistols.

A hitman holds his pistol.

Don Ricuzzo holds the SMG in the climactic scene.

During the night shootout, one of Don Turi's henchmen is armed with a submachine gun. It appears to be a Beretta M38/42 or Beretta M38/44.

During the climactic shootout one man is armed with a submachine gun that appears to be a Beretta M38/42 or Beretta M38/44, fitted with a Thompson-style foregrip.

The man at the right fires an SMG with a foregrip.

Alfio holds the shotgun during the attack of Don Ricuzzo's men.

Alfio holds the shotgun during the night shootout.

Numerous henchmen of both Don Ricuzzo and Don Turi use Lupara shotguns in classic Mafia-style, with sawn-off barrels and intact buttstocks.

Don Ricuzzo's man is shot and drops his lupara.

A henchman fires his lupara.