Cross and Mauser (Krest i mauzer)

Cross and Mauser (Krest i mauzer) is a 1925 Soviet B&W silent film directed by Vladimir Gardin. The plot is set in a small town in Western Russia (modern Belarus) in 1912 and then in 1922. The main character is a Roman Catholic priest Father Iyeronim Desnitskiy. In the first part of the film, set in 1912, he makes a career in the Church, not shying away from vile deeds, including provocation of the Jewish pogrom. In 1922 Father Iyeronim is a member of an anti-Soviet conspiracy, but the visions of the past at last make him to redeem. He renounces and is brutally murdered by other conspirators.

The following weapons were used in the film Cross and Mauser (Krest i mauzer):

In 1912 Nagant M1895 revolvers are used by the fighters of the Jewish self-defence group and by Russian Imperial police. 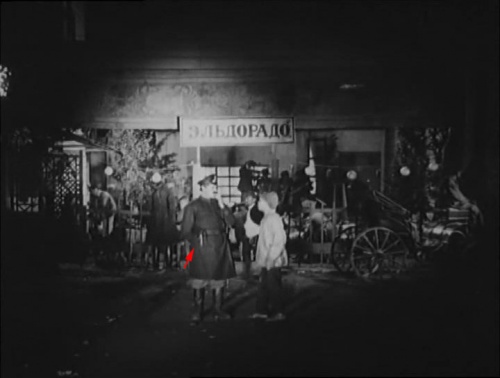 A Gorodovoy (policeman) carries a Nagant holster. The lanyard is also seen, proving that the revolver is inside the holster. 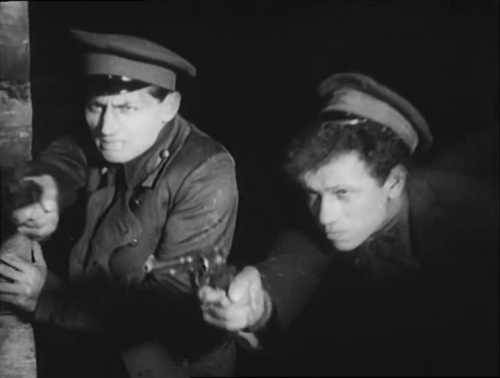 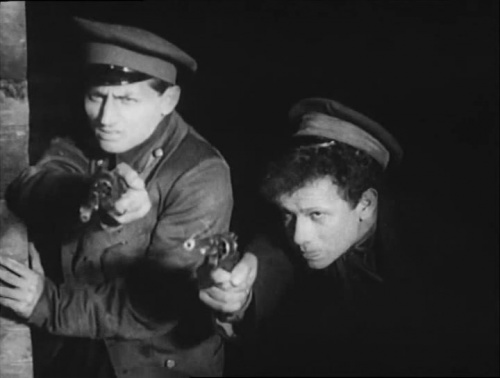 During the shootout with Soviet Militsiya in 1922, one of the conspirators holds an unidentified revolver. 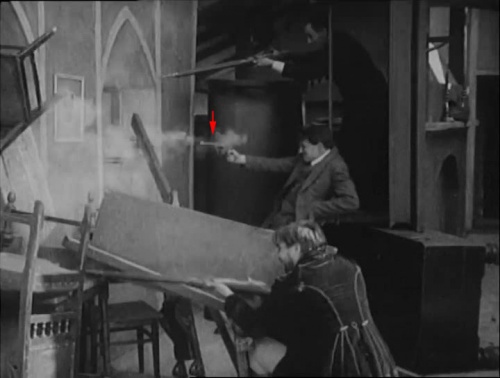 A conspirator in center fires a revolver. It looks larger than a Nagant.

In the final scene Vicar Shur (Naum Rogozhin), the foreign spy and head of the conspiracy, takes a Mauser C96. 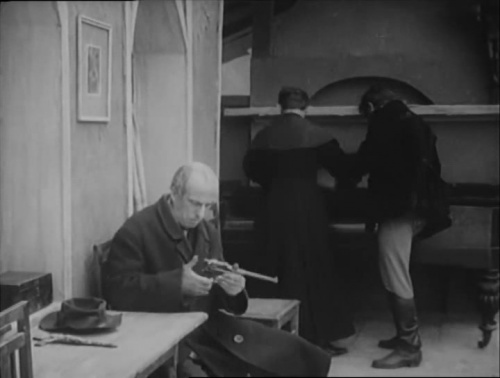 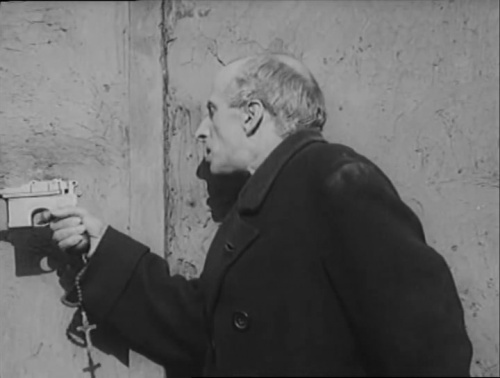 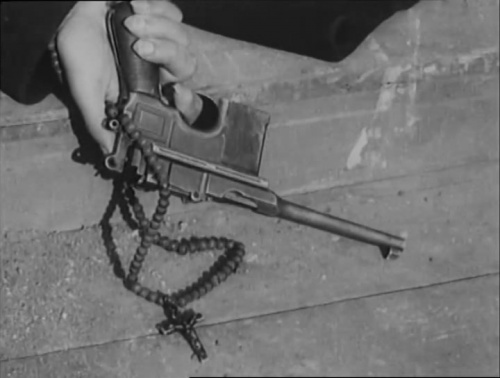 A close view of the Mauser in Shur's dead hand.

In one scene in 1922, a hunter with a Single Barreled Shotgun is seen. 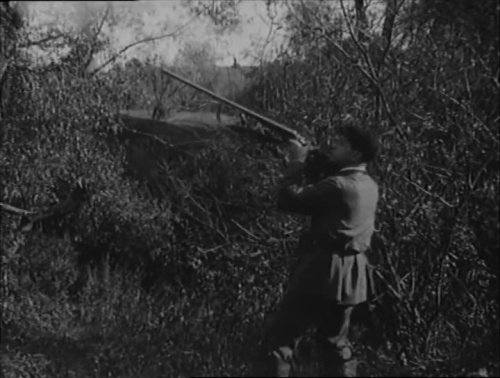 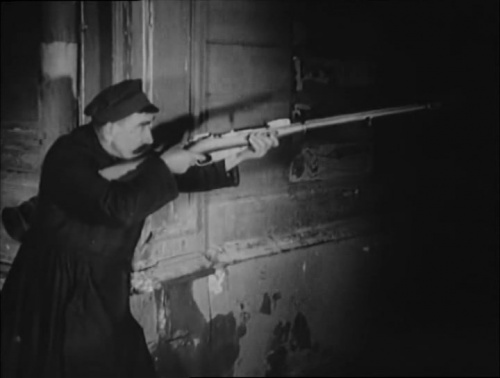 During the pogrom in 1912, a thug fires at Jews who try to seek shelter in the Catholic cathedral. 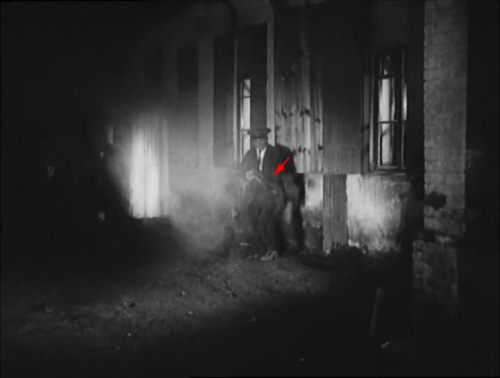 A fighter of the Jewish self-defence group fires at thugs. 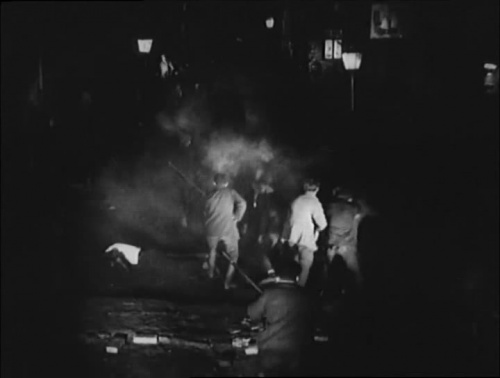 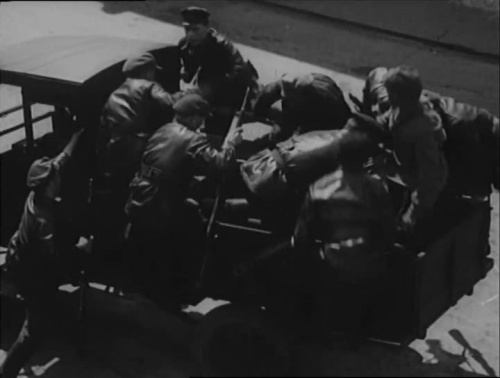 During the operation against the conspirators in 1922, Militsioners get in the lorry. Note the shadow at the bottom right that shows the shape of Mosin Nagant rifle. 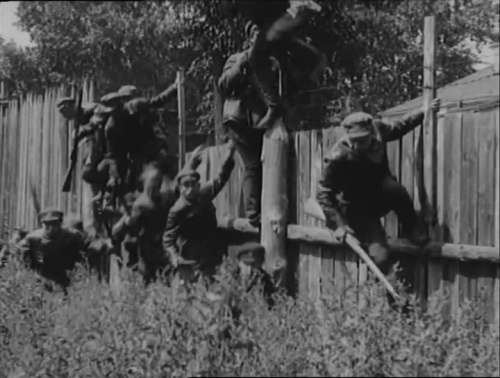 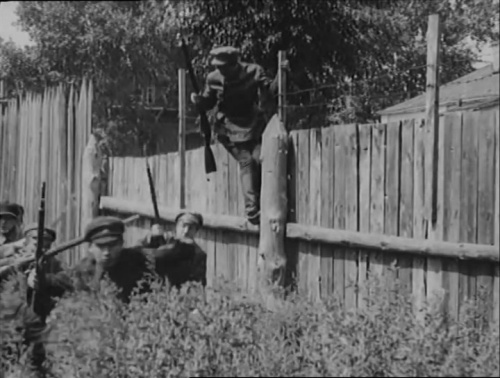 Militsioners hold M91 rifles during the operation. The rifles are of Infantry model. 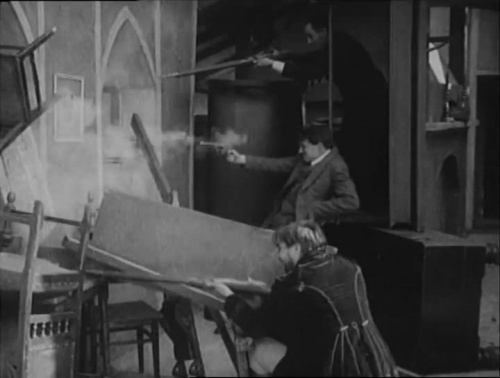 What seems to be a Mosin Nagant M1907 Carbine is seen in hands of a Militsioner in 1922. 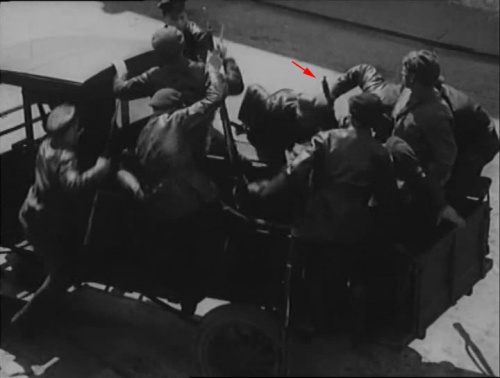 A short barrel of the rifle at the right allows to identify the gun as M1907 Carbine.
Retrieved from "https://www.imfdb.org/index.php?title=Cross_and_Mauser_(Krest_i_mauzer)&oldid=1366587"
Categories: