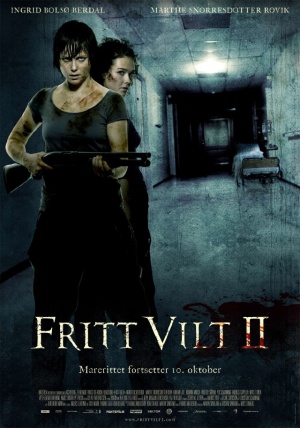 The following weapons were used in the film Cold Prey II:

A Glock seen in the hand of a dead Einar (Per Schaanning).

Kim using his MP5 as leverage to prevent being dragged into a room.

Jannicke (Ingrid Bolsø Berdal) takes a Maverick Model 88 from a police car. Einar (Per Schaanning) disarms her and gives this weapon to Ole (Kim Arne Hagen).

Good view of the tube magazine.

The Maverick Model 88 on the ground. Note the distinct crossbolt safety.

Jannicke (Ingrid Bolsø Berdal) uses a Winchester Model 120 at the film's climax. This gun is also seen in the hands of Camilla (Marthe Snorresdotter Rovik) and The Mountain Man (Robert Follin).

Close-up on the action of the Winchester Model 120. Note the shape of the trigger guard which identifies this as the entry Model 120 rather than the Model 1300.

Closer view of the ejection port.

A good view of most of the shotgun.

View of the scope.

This shot is blurry due to movement, but the stock's shape can be seen.
Retrieved from "https://www.imfdb.org/index.php?title=Cold_Prey_II&oldid=1414446"
Categories: