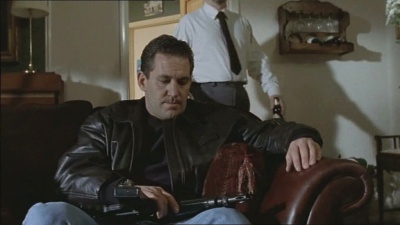 Chris Ryan as Sgt. Johnny Bell with a Heckler & Koch HK53 with 40 round magazine in Ultimate Force.

Chris Ryan is the pseudonym of former British SAS operative Colin Armstrong, whose actions during an ill-fated mission during the Gulf War were chronicled in the films The One That Got Away and Bravo Two Zero. Upon his retirement from the SAS, he has written extensively about his experiences and co-created the series Ultimate Force. Chris Ryan's Strike Back is also based on his novels.