The CS/LS06 is a Chinese submachine gun, designed by Chongqing Changfeng (merged with Chongqing Jianshe as of 2014), using helical magazines similar to that of the PP-19 Bizon.

The weapon went through several iterations of designs and names. It was initially designed as the QC-9, using 5.8x21mm before switching to 9mm. It has two feed methods, a 55-round helical magazine that doubles as a stock, and a standard QSZ-92 15-round double-stack magazine inserted into the grip. Due to being too difficult to use, the helical magazine-stock hybrid design was scrapped and the helical magazine was moved to the top of the weapon. Difficulties regarding the reloading procedure with the two feed mechanisms resulted in the double-stack magazine feed being scrapped as well. More redesigns reduced the magazine capacity from 55 rounds to 50, and simplified some other internal mechanisms, creating the CF-05 (this is also its most commonly used name).

The CF-05 would go through several more redesigns before being first revealed in a military magazine in 2002, and physically revealed in a 2005 police expo. Many stock and grip designs were went over during this period, settling on an internal telescoping design, and the magazine went from opaque to translucent and back to opaque again. By 2006, the design was finally finalized and designated CS/LS06 for production. Another redesign sometime after production began modified the selector switch design, added a small Picatinny rail, and made the front grip foldable.

The Chang Feng CF-05 and variants can be seen in the following films, television series, video games, and anime used by the following actors: 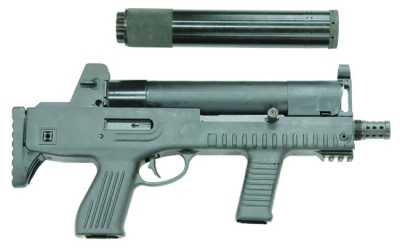 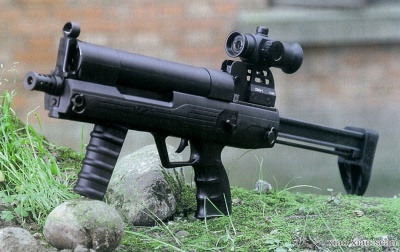